Flood management plan on the way?

About 100 people turned up to the first public consultation meeting on flood management on February 18 at the Castlemaine Town Hall.

The meeting consisted of three presentations on flood issues by Catchment Managers and water industry experts—unfortunately rather repetitive and sometimes barely audible in the town hall acoustic. The presentations were followed by one on one discussions between officials and residents using large maps of the area. 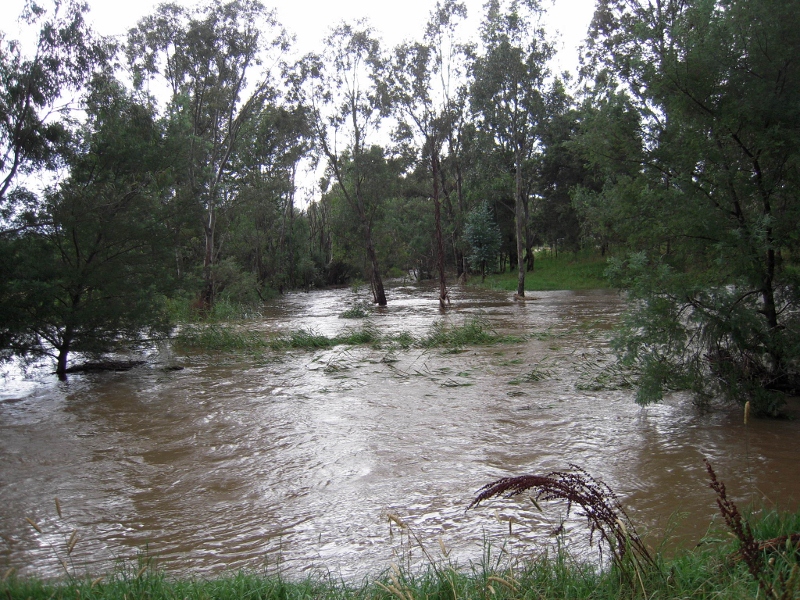 Forest Creek/Barkers Creek junction, January 2011: at the high point of the floods water coming into the streams was five times the carrying capacity of the stream beds.

There was an expectation that this would be a fiery meeting because of dissatisfaction with the way flooding has been handled: and it was clear from this meeting that there’s still plenty of anger and pain in the community about the issue, some of those affected by floodwaters  calling for extensive clearing of vegetation along Barkers and Campbells Creeks. It’s also clear that there’s a bit of confusion in the community about who exactly is responsible for our waterways, and it’s to be hoped this can be cleared up in this process.

The main thrust of the meeting, however, was to take and assess as many ideas as possible to prevent a repeat of the damage inflicted by the floods of 2011 and 2012. Among the ideas fielded were:

The bottom line in all these discussions seems to be that when we get large dumps of rain, floods are inevitable because there’s too much water for the streams to hold. One estimate is that at the height of the flood the amount of water in Barkers Creek was five times the capacity of the stream bed. At times like this, water naturally overflows into flood plains, and the moral is: avoid these areas.

The material collected at the meeting and from community questionnaires is being considered by a community based steering committee on flood issues. Further community updates will be provided allowing more opportunities for the community to make additional calls for mitigation ideas.

There’s a Community Questionnaire on these issues in circulation. It’s supposed to be on the Catchment Management Authority’s website, but if you can’t find it there, look in the Documents section of this site.