Readers who have followed the intermittent controversies over whether vegetation along creek valleys raises flood levels might be interested in the picture below, showing Campbell’s Creek, looking downstream from the Gaulton St bridge in 1946: 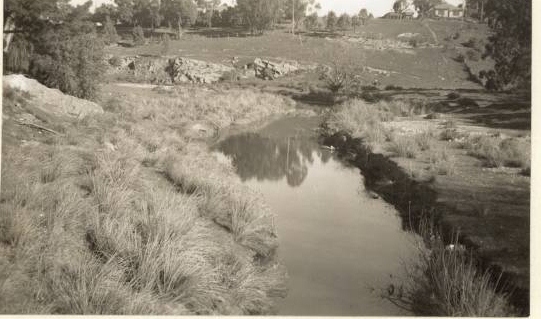 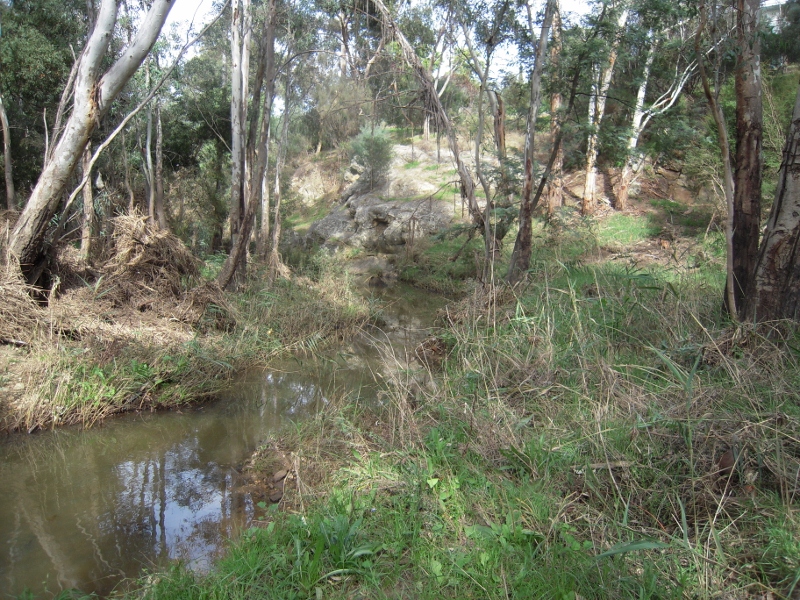 The same section of creek, 2011: the cliff where the creek takes a sharp turn to the left is visible in the background. This section of the creek featured in complaints that vegetation caused flooding in the last year.

The photo shows the result of years of revegetation work. Vegetation in the creek was blamed by a local businessman for raising flood levels last year. What is frustrating about such claims is that they could easily be judged if only the relevant authorities could refer to accurate flood  maps which would show water levels reached in previous floods–when there was little or no tree cover along the creek. Amazingly, it seems that such mapping is not available–not here, and not elsewhere in the state: which means that many planning decisions are made without vital knowledge of the places they’e dealing with. In the absence of such knowledge, we thought we’d run an occasional series of very short items recalling past floods [ones that happened when there was very little vegetation cover around our waterways], starting with 1909.

Castlemaine has experienced regular flooding–the disaster of 1899 being possibly the worst in terms of damage. The 1909 flood, by contemporary accounts, was even higher. Dredges in Campbell’s and Forest Creeks were submerged, the Botanical Gardens were under water, and, according to the Mount Alexander Mail [20/8/1909], ‘dead goats, cattle and other domestic animals’ as well as other debris, floated through the town. Gingell Street was flooded, and on August 21st, the Mail reported a ‘frightful quagmire’ in that street: ‘Just where the silt comes from is what is puzzling the householders who yesterday morning found a layer of three inches on the floors of their flooded houses.’

This last observation is a revealing comment on attitudes of the time: it seems obvious now that the silt was washed off land stripped of vegetation cover in the previous fifty years. The importance of vegetation in protecting soil is a lesson which needs to be regularly relearned–as the current state of the Tarilta valley shows.