Poverty Gully Burning [1]: what’s it for?

The Poverty Gully management burn [CAS 008] was a Zone 1 fuel reduction exercise covering 99.6 hectares on the Castlemaine town side of the Dingo Park road, north of Poverty Gully Track. It was conducted late last year.

The Arthur’s Track burn [CAS 107] is a Zone 2 exercise covering 243 ha on the south side of the Poverty Gully Track. The two burns, CAS 008 and 107, are contiguous, but the Arthur’s Track exercise has been broken up: an area was done in November, and we assume the rest will be finished in Autumn. This is to take account of the presence in this zone of Castlemaine Spider Orchids, and Eltham Copper Butterfly colonies. 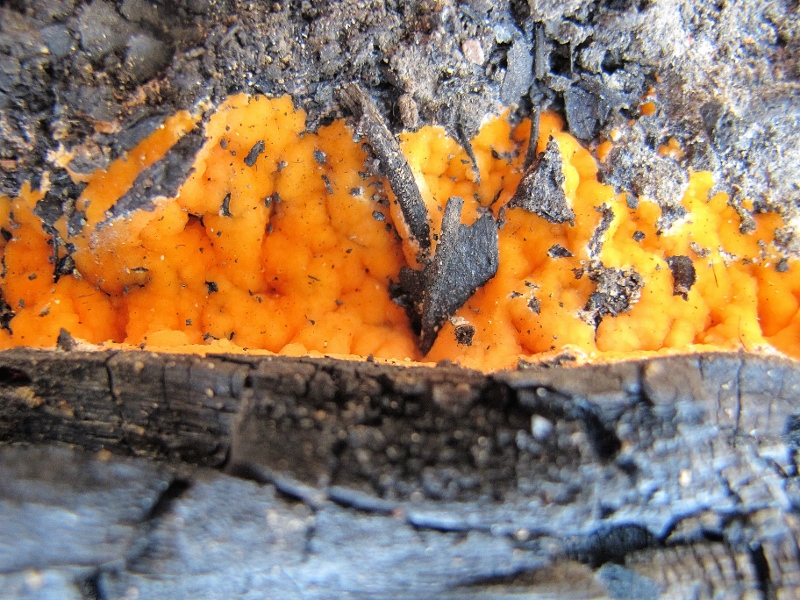 Fire fungus growing in the ash of the Poverty Gully fuel reduction burn. Zone 1 Asset protection burns are for fuel reduction only, but it's worth asking if the safety effect could be achieved with less environmental damage.

The purpose of Zone 1 reduction burns is fuel reduction to ‘provide the highest level of localised protection to human life and property.’ According to DSE’s Code of Practice fuel treatment ‘will be carried out through a combination of planned burning and other methods such as mowing, slashing or vegetation removal.’ The aim of the operation is to remove or substantially reduce surface and suspended fuels: in effect, we’re told, a burn aims to cover 90 % of the parcel in question.

There is no provision for ecological management in Zone 1 prescriptions, and DSE officers have frankly admitted that these are sacrificial zones, ecologically speaking. In particular, it’s envisaged that these areas can be burned every five years: the Tolerable Fire Interval for bushland in our region is at least ten years: that is, for bush to be able to regenerate fully it needs at least ten years between even mild fires. The system, therefore, must inevitably produce an impoverished environment. The only concession is that the Code of Practice directs that ‘the department will seek to moderate the negative impact as far as practicable.’ This is the price the community pays for safety.

The aim in Zone 2 is to get 80% burn coverage. The Code of Practice directs that managers will seek ‘to manage for ecologically desirable outcomes, provided bushfire protection objectives can still be met.’ It’s proposed to burn these zones every ten years or so.

If you want a good idea of the effect of frequent reduction burns, the place to go is the Railway Dam, south of Chewton: the strip of ground along the railway reserve in this area is quite rich, floristically speaking. The adjacent fuel reduced zone is relatively pretty barren. A comparison of the amazing railway reserve on the Maldon side of Muckleford station with adjacent forested areas will give a similarly sobering experience.

The bottom line for managers, however, is to get the fuel down: the community, the Government [and the Opposition] want this, and it’s a bit beside the point to criticise those implementing the policy—unless their implementation doesn’t conform to their own stated standards, as expressed in their Code of Practice. This Code requires DSE to assess and report on its actions ‘in a  manner which meets public accountability objectives’, but we’ve never seen a burn report, so we can’t comment on how they see the success or otherwise of what they’re doing.

The point of this report is not to question the fuel reduction effectiveness of these exercises, but to assess their environmental effects, and to ask whether these could be improved while still achieving the safety aim. Our provisional conclusion is nothing new: these exercises could be greatly improved if more resources were put into them, and if managers weren’t under so much pressure to burn a lot in a short time.