Here are some impressions of the Poverty Gully burns. We’ve divided them into six sections, and would be interested in any further member comments. We’ve made no effort to assess the burns’ success in reducing fuel.

A comical touch?—the polythene sheeting put into the water race by Coliban Water a few years ago to prevent leakage was melted and burned to a black ash or slime. There’s a slight element of madness here: as this review is being written [January 31] water is flowing through the channel from Malmsbury. This channel is 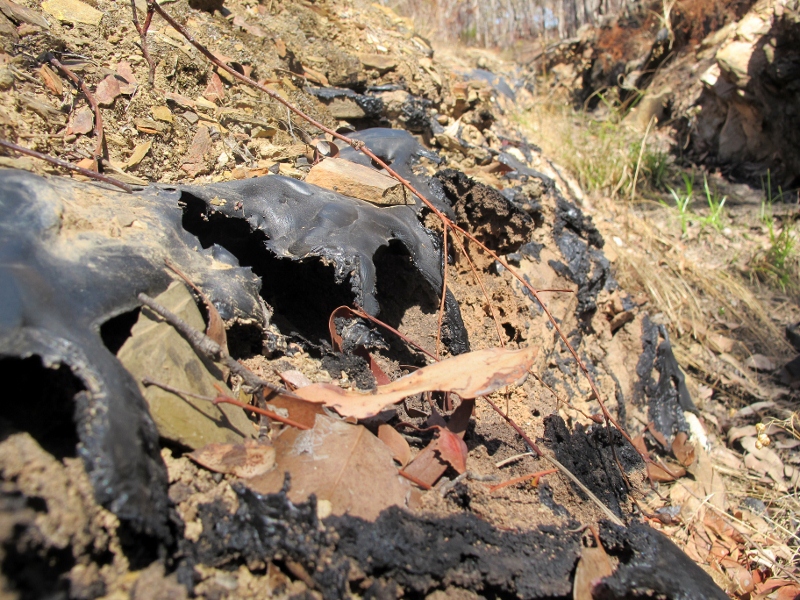 Poverty Gully channel, February 5: Most of the sheeting put in by Coliban Water to reduce leakage from the channel was destroyed by the reduction burn--not a great advertisement for inter departmental consultation.

notoriously leaky, and it’s been suggested that it should be taken out of commission—but if water is going to be brought through it, it might as well be done as efficiently as possible. It’s not great that one Government body is burning down the work of another. DSE is bound by its protocols to consult with other relevant managers before conducting its burns, but we believe Coliban Water wasn’t consulted on this one.

Large old trees are not a fuel hazard targeted by reduction burns, but FOBIF has found that it’s common for DSE fires to destroy these trees. This is a big loss to biodiversity with no gain for safety, and over the years we’ve puzzled over why it inevitably happens. Among possible answers: the managers on the ground don’t really know or care about ecology [true of a minority of DSE managers]; lack of knowledge of the burn parcel as to where valuable tree assets are [with increasingly large burn parcels, this is quite likely]; and lack of resources to identify and exclude valuable trees in the burn zone [the most likely explanation].

When compared to recent DSE ‘fuel reduction’ operations, like Ashby’s Track in North Castlemaine [an out and out artificial bushfire] and Tarilta Gorge [a travesty of an ‘ecological’ burn], CAS 008 and 107 are greatly superior jobs. Relatively few

tree canopies were scorched or burned; few large trees were brought down; gullies, on the whole, were not burned.

DSE officers have been sympathetic to requests that consideration be given to the ecology of the Poverty Gully area. Their job is complicated by the presence of a significant patch of spider orchids in the zone 1, and in the Zone 2 area of a colony of Eltham Copper butterflies. Both species are protected by biodiversity legislation. The Zone 2 area was broken into two parcels to allow the sensitive areas to be treated in Autumn. The spider orchid patch in Zone 1 [an area about 50 metres square] was excluded from the fire; and some effort was made to protect sweet bursaria plants [potential hosts for the butterfly] along the ridge top—unsuccessful, as it turned out. These plants were in the area between the water race and the ridge top; if the fire managers had been more attentive about avoiding damage to the race itself [see above] they might have been able to avoid burning the bursaria too.

The CAS 008 parcel falls away to the north from the Poverty Gully ridge, along which the Poverty Gully track runs. This track roughly parallels the water race which is the Great Dividing Trail. The topography is quite steep; the parcel is grooved by numerous gullies which drain away eventually to the Forest Creek/Campbell’s Creek catchment. 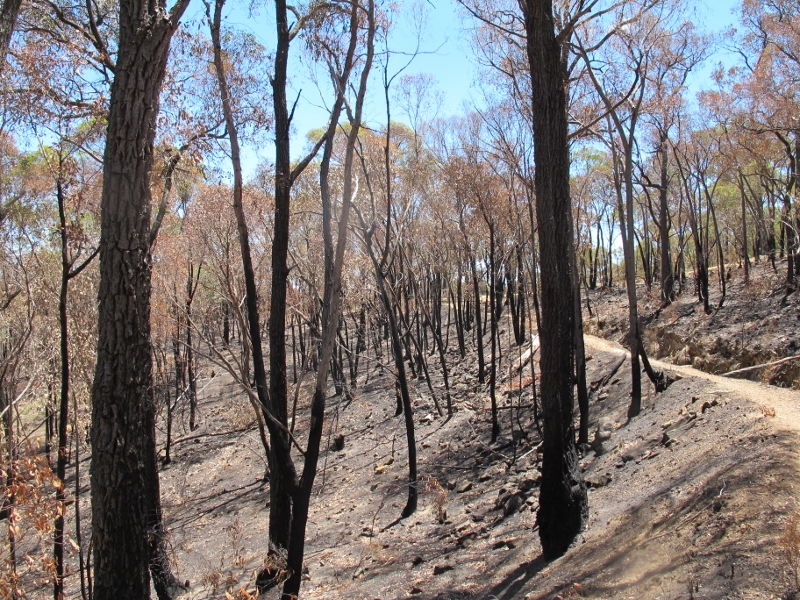 It’ll be interesting to see what happens if we get a dump of rain any time in the next few months. If we do, it’s likely there’ll be a fair bit of soil loss in this area. It’s worth noting that one of the source problems for flooding in Campbell’s Creek is the huge dumps of water which can come very quickly out of the Poverty Gully area in times of heavy rain. And one of the reasons for the speed and severity of this flooding is the thin soil and lack of vegetation cover which might slow the flow out of the catchment [see our POST ]. This is one case where different objectives—flood mitigation, fire protection—might be in conflict.

The division of CAS 107 into two stages apparently required the construction of  ‘mineral earth breaks’ in the form of new access tracks running south down Poverty Gully. These are quite likely to become trail bike tracks with resultant soil damage unless they’re rehabilitated promptly. DSE’s record on this isn’t great: a brand new track they put in the Fryers Forest, from Irishtown to Hunter’s track, which serves no access purpose whatever, and which we were promised would be ‘rehabilitated’ promptly, is still there two years later.

Finally: The Fire Operations Plan is devised on the assumption that normal climatic conditions will apply—that is, we’ll get a reasonable amount of rain, and the bush will ‘recover’. If we don’t, the cumulative effect of these fires will be to create a desert.

On the other hand, these burns are conducted to protect the forest and the community from very big fires. If this aim is achieved, then the overall effect of the burns could be said to be positive–but that’s another argument.