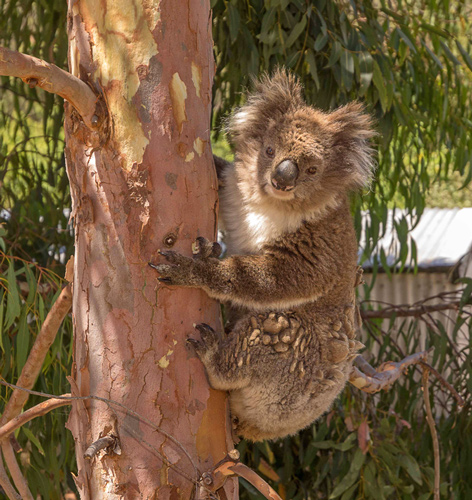 The satisfied looking individual above was photographed by John Ellis at Golden Point last week. He was ‘a friendly chap, who didn’t mind posing at camera height.’

Koalas are not uncommon in our area, with some landholders reporting sightings every couple of weeks. Numbers around the country vary widely: last year Federal Conservation Minister Tony Burke classified koalas as ‘vulnerable’ in NSW, Queensland and the ACT. Numbers there have dropped by over a third in the last 20 years. In Victoria the situation is complex, with populations so heavy in some areas south of the ranges that they’re eating trees bare—a problem both for the animals and for the environment. The Victorian Koala Management Strategy is a bit out of date, but still worth a look. Among other things, it offers the information that the koala is worth over a billion dollars a year to the Australian tourism industry!

It seems that in the maintenance of healthy populations corridors linking appropriate habitat are important. Among threats to koalas are domestic dogs. For practical info on this, check the Koala Foundation.

Koalas feed on leaves from a variety of species of eucalypt leaves, and will occasionally have a go at wattles, tea tree and melaleuca. We’d be curious to hear from anyone who has observed their dietary habits in this area. According to DSE, the preferred forage species in Victoria are River Red Gum, Southern Blue Gum, Swamp Gum and Manna Gum, but koalas also feed in other trees present locally, including Yellow Box, Grey Box, Red Stringybark and Red Box. The specimen pictured above was on an Angophora! 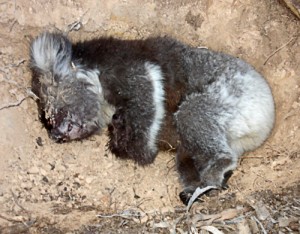 On a less positive note: this week Paul Hampton found the young koala pictured at left in distress on his property in Muckleford. It died before animal rescue could be effected. It seemed to have fallen from a tree, possibly heat affected.

Post script: Good Koala pics taken in the Muckleford Forest can be found in Geoff Park’s January 14 post on the Natural Newstead blog.