How should we look after our waterways?

FOBIF has made a submission to DSE’s draft Waterway Management Strategy.

Apart from suggesting that some of the policies in the document are a bit vague, our submission centred on two matters: the influence of management fire on catchments, and the proliferation of ornamental dams.

We’ve been seriously concerned about the influence of thoughtless DSE burns on steep catchments. The draft document on page 195 says:

‘Excessive runoff from recently burnt waterways can cause flooding and carry high loads of sediments and nutrients into waterways,  particularly if a bushfire event is followed by heavy rains. Increased nutrients can lead to algal blooms in downstream water bodies. Sediments can reduce instream habitat….’ 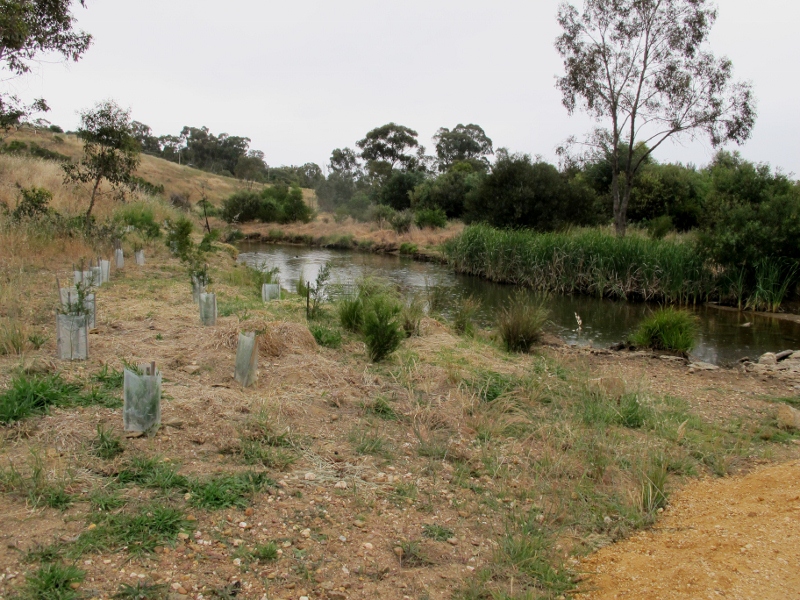 Castlemaine Landcare plantings along Forest Creek: the Waterway Strategy dismisses the idea that such revegetation projects act as fire 'fuses'. It also points out that such projects control erosion and reduce water speed.

This is the kind of thing which happened in this year’s Tarilta Gorge burn, and we’re concerned that it doesn’t happen in the proposed Amanda’s Track burn along Middleton Creek. We’ve proposed that DSE be obliged to consult with water authorities before any burning takes place in catchments. [This is already supposed to be routine policy, but there’s reason to suspect that it’s not taken too seriously].

On ornamental dams [wrongly called ‘farm’ dams], we’ve called for tighter licensing conditions. The Nationals MP for Northern Victoria, Damian Drum, has estimated that “…In our part of the state as much as 124 billion litres of water a year don’t make it to our creeks and streams because of the explosion in small, mostly unlicensed dams.” Mr Drum correctly states that this water would be better used on farms and in cities—and we would add that it would be better used flowing down to the Murray and downstream towns.

The document has some interesting observations on page 195 about riparian vegetation and fire. It dismisses the theory that revegetated waterways act as ‘wicks’ or ‘fuses’ carrying fire to settlements: ‘under low to moderate fire conditions, well managed riparian vegetation, with limited grass and weed growth, is less likely than pasture or crops to contribute to the spread of fire across a property or the  wider landscape.’ Even under extreme conditions riparian areas, it is argued, have less influence than ‘landscape level grass and forest fuels.’ Fire risk from revegetated areas declines as grass and weeds are replaced by appropriate shrubs.

Revegetation projects are widely believed in some sections of the community to be dangerous fuses—in fact, many CFA officers subscribe to the theory—so it would seem that there’s room for a bit of community discussion on the subject.