FOBIF’s detailed response to the draft Fire Operations Plan for our district is published below. We will know the effect of this and other responses to the draft plan when we attend a meeting with DSE in Bendigo in mid September.

As we have previously made clear, our major worry is the signals we have been receiving from DSE workers that there is little intention of following the directions of the Code of Practice in Zone 3 burn operations. 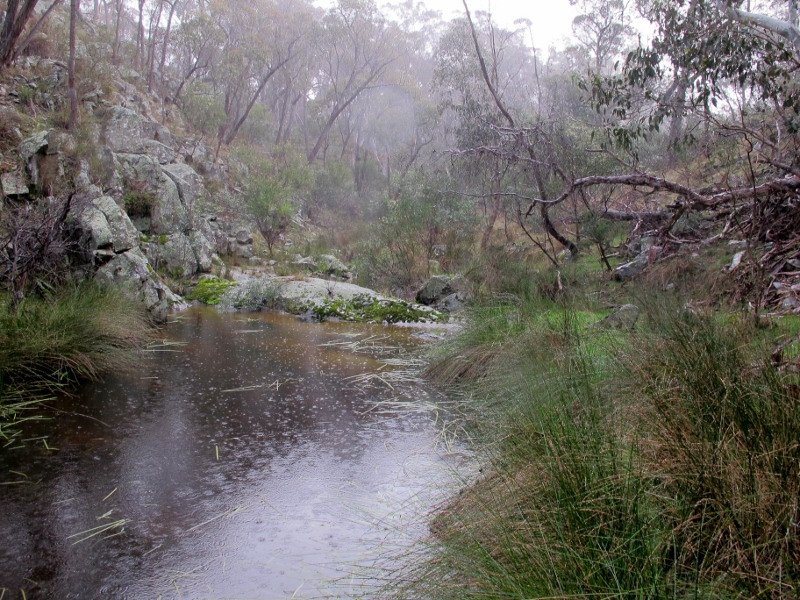 Hunters Creek, in the Tarilta catchment: if current proposals go ahead, we estimate that 70-80% of this catchment will have been severely burned within a five year period.

Other serious concerns include the allocation of a huge area of Mount Tarrengower to be 90% burned, and a section of the Diggings Park south of Guildford to be 80% burned. The full submission follows:

We will make our submission according to zones, and starting with Zone 3. We believe that the politically imposed burn targets, many of which have little or nothing to do with human safety or environmental health, make it urgent that DSE and Parks take special care with each operation: and it is in Zone 3 that success or failure is most obvious. In view of the collapse of bird numbers measured by Castlemaine Field Naturalists, and severe insect infestations in Eucalypts south of Vaughan, ‘ecological resilience’ becomes a major priority.

At the July consultation meeting in Bendigo [DSE fire manager] Simon Brown described Zone 3 operations as aiming at a burn coverage of a ‘minimum of 20%’. During the following discussion the figure of 30% was mentioned. However we have been recently informed by DSE operatives that the actual aim is 50%.

Further, though the FOP and the Code [of Practice]  refer to ‘ecological resilience’ and ‘forest regeneration’ as objectives we have again been informed by DSE workers that fuel reduction is the sole consideration of burn managers. We also notice that all Zone 3 burns have been tagged in the FOP as ‘FRB’.

Given that ‘ecological resilience’ and ‘forest regeneration’ are objectives of these exercises, it seems illogical to be burning in Spring, when plants are setting seed and animals are breeding.

In our submission to DSE on fire zones in August 2011 we wrote that Kevin Tolhurst had argued that management burns might work ecologically if they were of ‘low intensity’, and we offered a warning about the proposed Limestone Tk [CAS 51] burn. We added:

‘..Our experience with last year’s Wewak track burn makes us very apprehensive about both the fuel load and ecological outcomes. The rampant destruction of mature trees and resultant explosive [stringybark] regeneration, together with much bare earth, is a great cause for worry when considering the Tarilta creek, a much steeper and therefore erosion prone topography. We believe that detailed planning of this burn, and tight supervision, will be necessary to avoid last year’s problems [or worse, given the steeper slopes]. We have these concerns about all proposed EMZ burns.’

This precautionary advice seems to have been completely disregarded, and the resultant disaster is in the Tarilta creek for all to see. [see https://www.fobif.org.au/2012/03/tarilta-gorge-burned-off-washed-away/  and following posts]

When these three parcels are added to last year’s severe and destructive Demo Tk burn, a very large proportion of this forest block will have been covered in a short time. If this pattern continues, the whole of the Maldon/Muckleford block will have been burned inside ten years—disastrously inside the Tolerable Fire Interval for this type of bushland. This would seem to work clearly against ‘ecological resilience’ and ‘forest regeneration’.

This is a very large parcel for a Zone 1 burn—as far as we can see, more than double the area of any other Zone 1 in our district. It’s very hard to see why it has been zoned in this way. While it is clear that bushland abutting the town needs careful fuel management, it’s by no means clear why the south side of the Mount needs high intensive fuel reduction, especially since the area around the Tower was burned in 2009.

This area is a mixture of good quality bush with fine trees, and degraded, weed infested land.

The southern part of this zone is especially infested with oxalis and bridal creeper. Ill directed fire could enable these to outcompete native grasses.

See our general comments above about Zone 3 burns.

This parcel abuts the significant Asset Protection Zone running along the Pyrenees Highway. This Zone 1 strip has been severely burned in recent years, and if these burns have had any effect on fuel levels fire coverage in CAS 13 should not need to be either extensive or severe.

See our general observations above about Zone 3 burns

These proposed burns are adjacent to or close to this year’s Limestone Tk CAS 51 [Tarilta] exercise.

Please note that the forest in this area has been subject to a devastating attack by some kind of leaf miner, possibly cup moth. Local residents report that trees are looking worse than they have for many years.

The fuel loads vary widely. We can’t see how this whole area can be considered as a single burn.

Please note that Guildford Landcare is conducting gorse clearance and revegetation work along the lower reaches of Middleton Creek. It would be ironic if the newly restored section was destroyed by silt deposition caused by DSE operations, in the manner of Tarilta. The cliff sections of the creek should definitely not be burned.

We are completely mystified that this parcel is in Zone 2. Given its situation it should be in Zone 3, and our general observations for Zone 3 apply here.

We endorse the observations made by Rusconi’s Rd resident Rob Simons on this proposal, particularly on the subject of the spread of flammable plants via roadworks and fire operations.

PLEASE NOTE THAT IF THE RUSCONI’S RD  AND PEPPERTREE TK PROPOSALS GO AHEAD, 70- 80% OF THE TARILTA CATCHMENT WILL HAVE BEEN SEVERELY BURNED BY DSE IN FIVE YEARS. THIS, COMBINED WITH THE CURRENT INSECT ATTACK AND PREDICTED DRIER CONDITIONS IN THE COMING YEARS, COULD HAVE A DISASTROUS EFFECT ON THIS FOREST AREA. This alone is a very good reason for altering CAS 9 to a Zone 3 and confining the burn area to 20%.

We endorse the submission of the Friends of Kalimna Park on these proposals.

We would like to emphasise that the CAS 3 parcel should not be treated as one, but for fully effective management of this valuable land, the exercise should be broken up and each section treated differently according to its different biodiversity and fuel load characteristics.

These areas contain important colonies of the Castlemaine Spider Orchid.