Radio National’s Background Briefing program ‘Fighting Fire with Fire’ [broadcast on February 19 and available for podcast here] was a very fair effort to canvass all points of view on fuel management issues. The fact that it seems to have been treated with respect by people with markedly different views is an indicator of the efforts made by the programmers to give all relevant people a say. 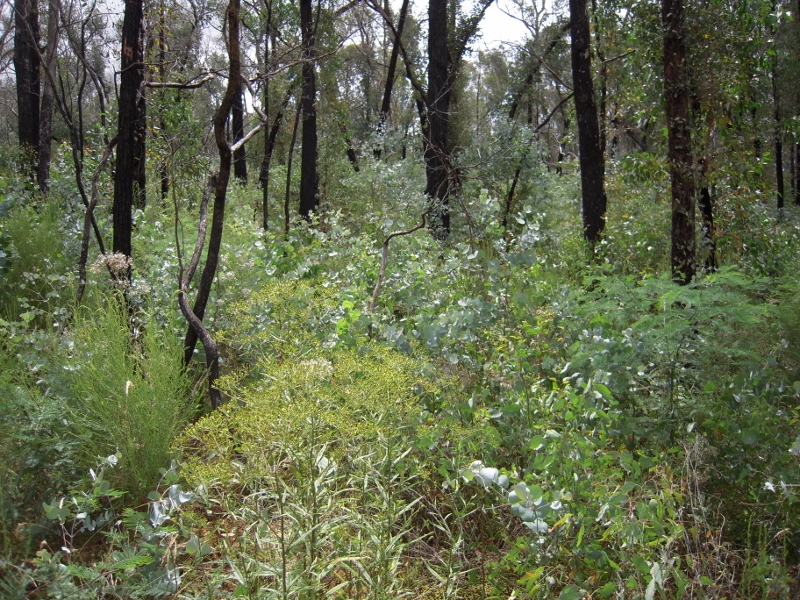 Dense head high regrowth less than two years after a severe 'reduction burn', Castlemaine Diggings NHP, January 2012. Management burns are complex exercises: FOBIF believes DSE is often underequipped for the task, especially since there is little evidence that monitoring is being used to improve practice.

The following comment on fuel reduction burns, by Victoria’s Deputy Premier Peter Ryan, is worth quoting:

‘In the public eye there’s a notion of a match being dropped and everybody walks away. It could not be further from the fact. These are very very carefully planned and carefully conducted and they are modified to accord with whatever might be the topography, what is the biodiversity, do we need a cool burn which can be just lit and allowed to creep through, do we need something stronger? You have to adjust all these things…all these things are taken into account by the experts we have engaged to undertake this task.’

On potential damage to the environment by the present system of burning, he added:

‘We have what are called Fire Operations Plans: these are refined, continually refined so people have ample opportunity to address these concerns you are expressing, and the fire management zones are designed to cope with these issues you are raising…’

Readers of our fire management section will know that FOBIF is a supporter of a zoning system for fire management. They will also know that repeated bitter experience has taught us that Mr Ryan’s claims about careful planning and management are a very large overstatement of the case. We have no doubt about the concern and professional commitment of most DSE fire managers, but they don’t seem to have the time or resources to pay the detailed attention to the effects of their burns claimed by the Deputy Premier. As far as we can tell, burn monitoring data disappears into a file somewhere and is not usually used to modify future practice.

It’s attention to detail that counts in these very difficult operations. We were reliably informed last year that DSE has still not processed monitoring data from 2003: without such carefully analysed information on burn operations no improvements in practice are possible. Meanwhile the five per cent target seems fixed. In the words of the Deputy Premier: ‘We are going to implement it. End of story.’