FOBIF has alerted Mount Alexander Shire council of an outbreak of Stinkwort in the newly developed section of the Wesley Hill industrial estate.

The plant, Dittrichia graveolens, is a declared noxious weed because of its capacity to get into pasture land. Stock refuse to eat it. It will not normally invade undisturbed bushland, but can spread along disturbed roadsides. 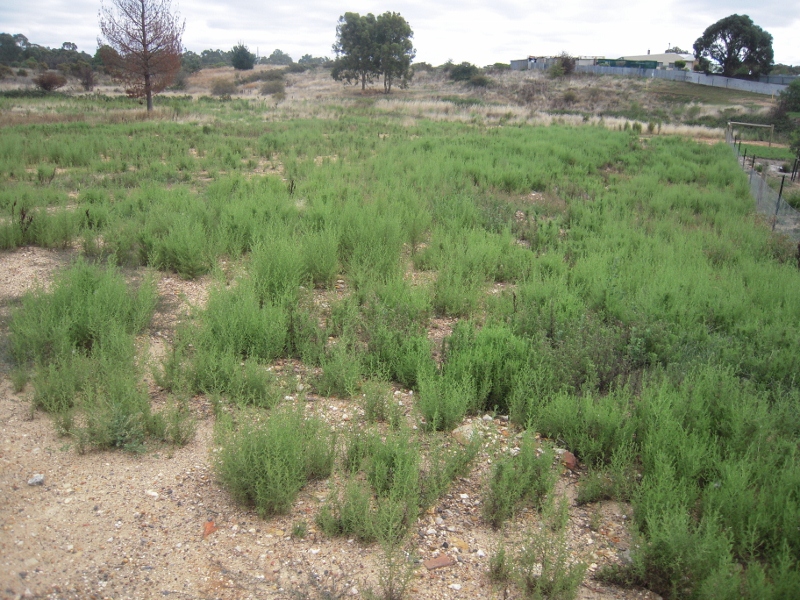 Stinkwort on the Wesley Hill industrial estate. The infestation is confined to the landscaped area, and may have been brought in by machinery.

Stinkwort is a smallish shrub to about a metre tall, with slightly sticky foliage. If you rub the leaves you get a very strong, not over pleasant camphor smell on your fingers. It has a small yellow daisy like flower. It seems clear that the present infestation has been brought in on machinery doing the landscaping of the new estate, because there are few plants outside the estate boundary.

Stinkwort has a history in our area. Local environmental history researcher Doug Ralph has unearthed a report of a heated meeting in the Metcalfe area in 1931 where farmers berated authorities for allowing the weed to get out of control on Mount Alexander. The Argus reported partly as follows:

‘Councillor James said that the Government was entirely to blame. It was most unjust that landholders had been brought before the Court for failure to eradicate stinkwort when their property had become infected from Crown lands where the pest grew unchecked. The Forests Commission should be informed that it should discontinue leasing the land for grazing until the pest had been killed with suitable sprays.’