It’s hard to like them, but they’re quite at home with us…

The picture below is of a dead Redback spider, Latrodectus hasselti, found in a Castlemaine garden. The species is infamous for its alleged propensity to lurk on toilet seats, but is actually quite shy, though it has made itself comfortable in human environments. As the Australian Museum puts it, the redback ‘favours proximity to human habitation, with webs being built in dry, sheltered sites, such as among rocks, in logs, shrubs, junk-piles, sheds, or toilets.’ They’re not particularly aggressive, but obviously you’d want to be careful if you’re working in areas where they might be found. 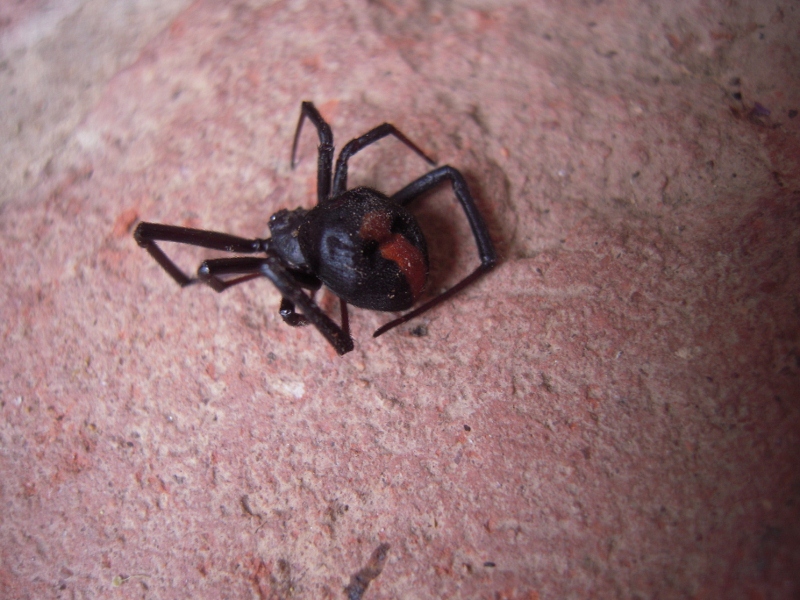 ‘Male Redback Spiders do not produce a web, but may be found on the fringe of a female’s web, especially during the summer mating season. The male has to make overtures to the female to discover whether she is ready to mate, which can prove fatal if she mistakes him for prey. It has been found that in order to occupy the female’s attention during mating, the male spider offers her his abdomen by standing on his head and ‘somersaulting’ his abdomen towards her mouthparts. The female begins to squirt digestive juices onto the male’s abdomen while the first palp is inserted. If he is not too weak, he will manage to withdraw, and then insert the second palp. She will continue to ‘digest’ his abdomen. Most males do not survive this process, which seems to be unique to Latrodectus hasselti.’