One feature of the relatively good rains we’ve had in the last year or so has been the great shows of lichens.

Lichens are partnerships between a fungus and an alga. The algal partner enables the organism to use photosynthesis to produce carbohydrate, something a fungus can’t do by itself. They are maybe the most widespread life form on the planet, flourishing from the polar regions to the tropics. Being sensitive to pollution, however, they’re not so common in cities.

There are over 20,000 species of lichens world wide, and 3,000 in Australia. Sometimes they just seem to be a colour on a rock, as in this orange Caloplaca sp: 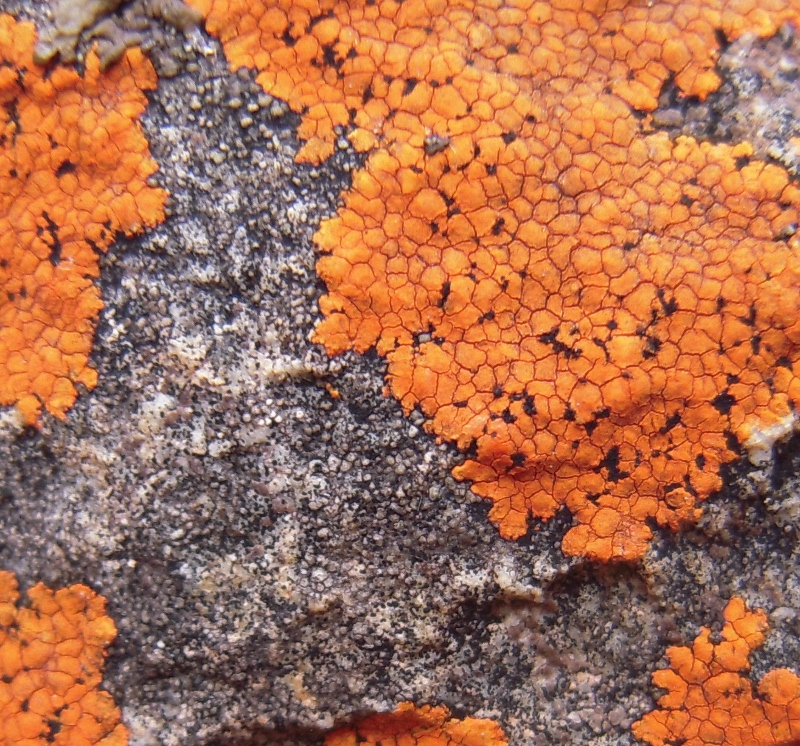 Caloplaca is a crustose lichen: you  can’t see its undersurface because it’s completely encrusted onto its substrate. But maybe the commonest and most widespread Australian genus of lichen is the Xanthoparmelia, a foliose lichen: that is, it grows more or less flat to the ground in sheets, but not entirely attached [though sometimes it seems pretty tightly stuck to the ground]. Australia has 300 species of this genus, of which over 200 are endemic.

We’ve all seen one or other species of Xanthoparmelia. At the moment, they’re all over our bushland.

Here’s one, from the Newstead Cemetery: 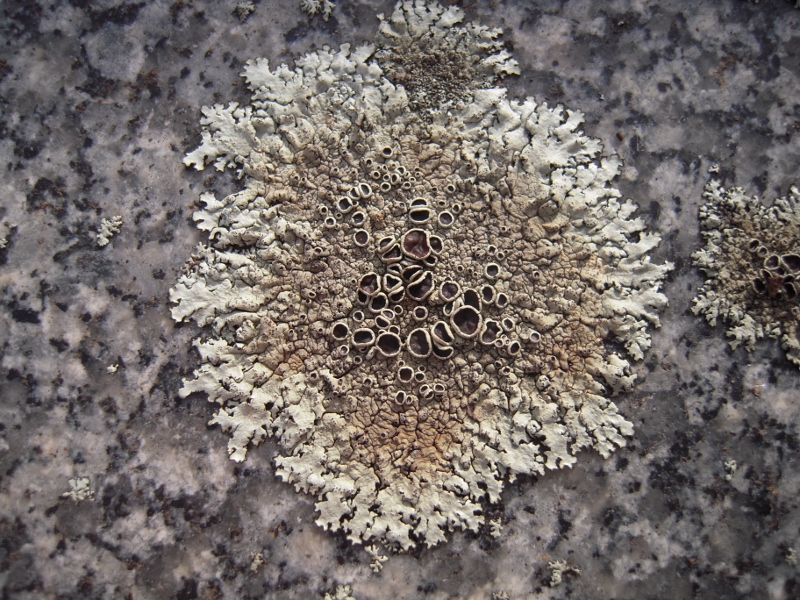 Xanthoparmelia, Newstead cemetery: the grey green, yellow green or grey brown colours of this species can be seen on rocks, roof tiles and even roadways all over the shire.

And here’s another, on a bottle in Chewton: 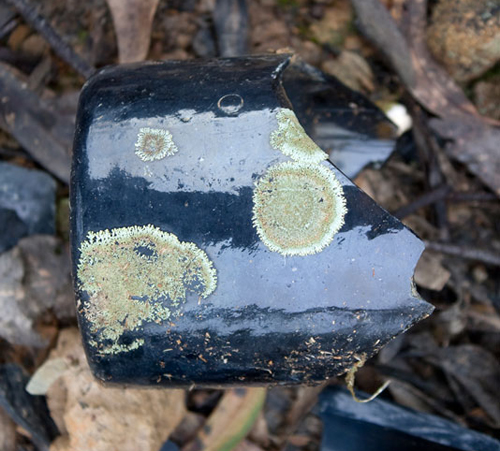 Lichens can grow nearly anywhere, but they are sensitive to air pollution. Photo by Bronwyn Silver, 15 October 2010.

Of course, things are never as simple as they might be. If you see a greenish, foliose lichen growing on live or dead trees [and, at the moment, it’s hard not to see them–they’re all over the place] it is most likely to be the genus Flavoparmelia. Xanthoparmelia grows mostly on rock or rock like surfaces.

Lichens are important in binding soil, in fixing nitrogen in soil, and in colonising damaged environments, preparing the ground for regeneration. If you want to know more, check out the website of the Australian National Botanic Gardens. It contains a wealth of clear info on lichen ecology as well as some curious facts about the uses to which lichens have been put in the past. Among other things:  ‘The Inuit of North Canada have been recorded as eating the semi-digested lichen contents within the stomachs of caribou, as a warm, post-hunt delicacy.’