Another trapping method is the ‘bladder trap’ and the intriguing Utricularia dichotoma is one of the carnivorous plants that uses this method. This ‘bladderwort’ is commonly known as Fairy Aprons due to the appearance of its flowers.

Fairy Aprons have a tiny ‘bladder’ which is small and submerged under water or in damp soil with a hair-triggered door that responds within 1/30th of a second to suck in any passing insect. The vacuum-driven bladder has been described as the most sophisticated carnivorous trapping mechanism to be found among plants. The violet flowers which are enlarged in this photo are tiny and grow on a thin stem. 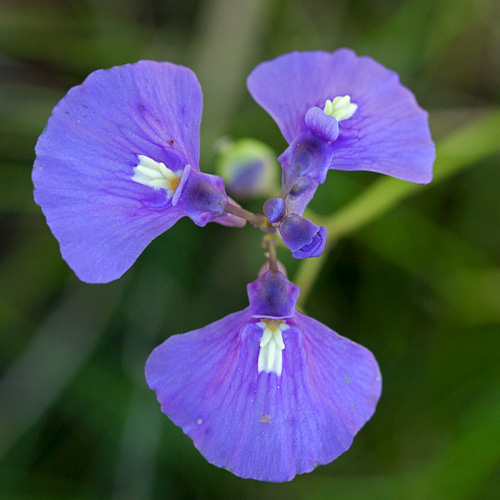 Early this year Doug Ralph discovered scores of Fairy Aprons in a swampy area in Harcourt not far from Mount Alexander. Three FOBIF members accompanied him to see and record the sighting. Although none had seen them before, Ern Perkins from the Castlemaine Field Naturalists reported that bladderworts have been previously been recorded on Mount Alexander, and also on some of the wet granite areas in the Harcourt-Sutton Grange area.