Tarilta Gorge: burned off, washed away

It’s sometimes hard to know what to call DSE burning operations: control burns? Fuel reduction? Ecological burns? Too often none of the above apply: there’s little control, apart from keeping the burn inside the control lines [and as we know, that isn’t always achieved]; the fuel is only temporarily reduced, as the severity of the burns sometimes provokes massive regrowth of flammable scrub; and the ecological function of the operations is mysterious, to put it mildly.

DSE burn CAS 0051, Limestone Track [better known to us as Tarilta creek valley], is described on the DSE website as aiming to ‘create a mosaic burn coverage appropriate to meet requirements of localised EVC’s [ecological vegetation classes] and to reduce the spread of fire.’ It’s in Zone 3 [Ecological Management Zone–EMZ]. FOBIF was given to understand at a DSE briefing in September last year that in such a zone the managers will aim at about one third coverage of the area with fire. 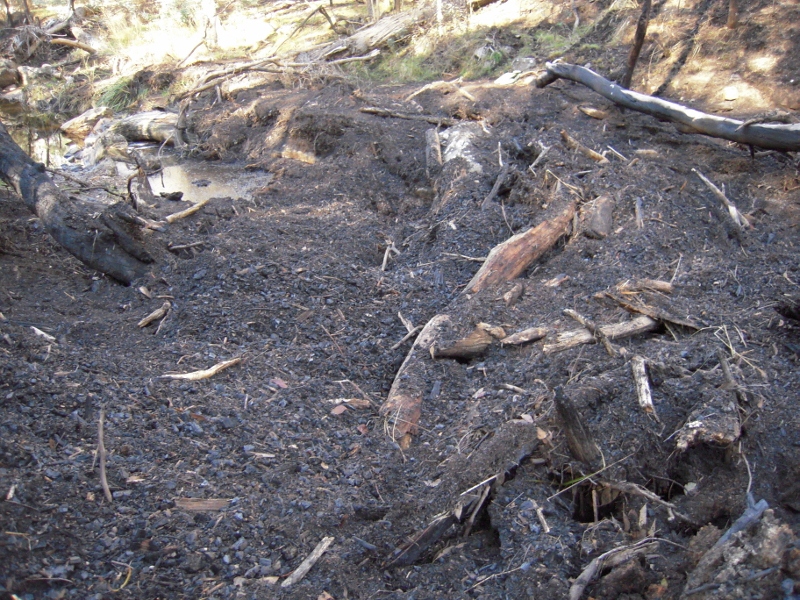 Tarilta Creek, March 19, 2012: silt and ash washed off the steep burned hillsides is in places over a metre deep.

The EMZ’s ‘primary objective’ is ‘promoting biodiversity and ecological renewal. Planned burning will be used to manage native species and ecological communities which require fire to regenerate. This also assists with fire protection outcomes by reducing overall fuel in the landscape.’ [DSE Fact sheet]

Tarilta was burned by DSE on the weekend of March 10th, and a very large plume of smoke suggests that it flared up again on Tuesday 13th. Heavy rain was forecast that week, and duly arrived on Wednesday 14th.

FOBIF representatives have visited the 556 hectare site [between Mount Franklin and Guildford] twice since the burn. We were concerned about this one in advance, and sceptical of its usefulness as a safety exercise, especially given the research released in January on the relative pointlessness of large burning operations remote from settlement [see our Post].

We had expressed our concerns to DSE in our response to their zoning proposals last year, as follows:

‘We noted Kevin Tolhurst’s comments on ABC local radio on August 25 to the effect that these burn plans might work ecologically if they are ‘low intensity’. This comment provides context for our second main concern, namely, CAS0051, Limestone tk, in the Tarilta creek area. This is a very interesting area, and our experience with last year’s Wewak track burn makes us very apprehensive about both the fuel load and ecological outcomes. The rampant destruction of mature trees and resultant explosive regeneration, together with much bare earth, is a great cause for worry when considering the Tarilta creek, a much steeper and therefore erosion prone topography. We believe that detailed planning of this burn, and tight supervision, will be necessary to avoid last year’s problems [or worse, given the steeper slopes]’. 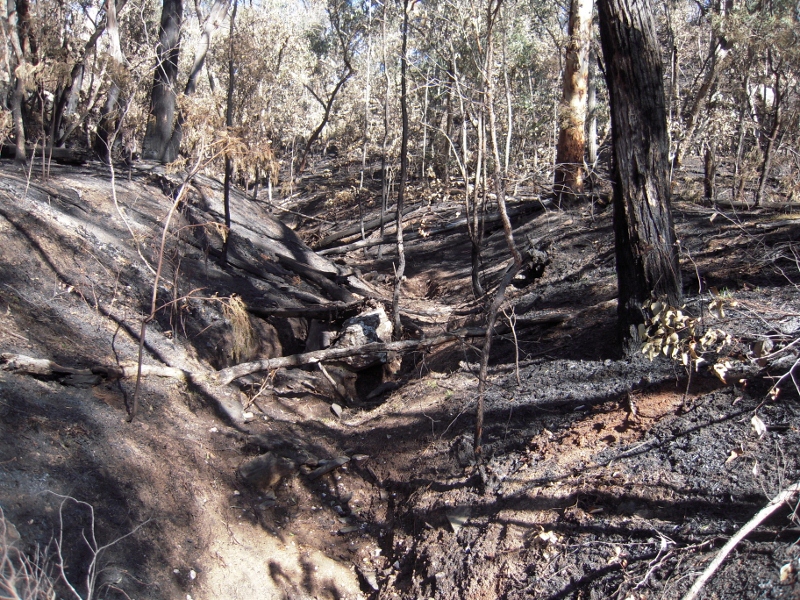 Steep tributary gully burned out by DSE. Heavy rain was forecast before the burn, but no erosion control measures seem to have been taken.

Our conclusions after two visits [and we intend to go down there regularly to see what kind of ecological change happens] are: 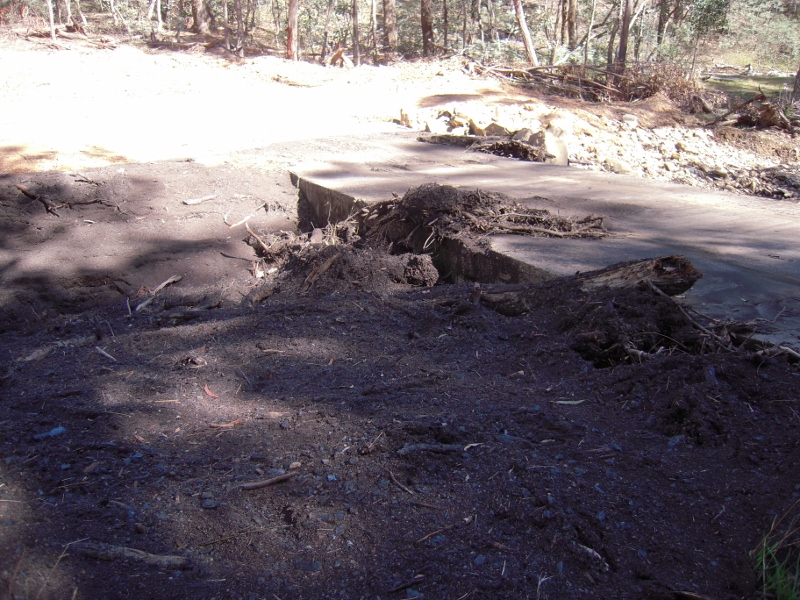 Silt and ash piled up at the Limestone Track crossing: loss of topsoil from the steep slopes must be considered a serious ecological setback.

And here’s a post script from the CSIRO: ‘it is the condition of the land that determines the impact of floods. Good vegetation cover is the key to preventing erosion, but drought, fires and overgrazing cause the loss of protective vegetation. These degraded habitats take years to recover their natural resistance to erosion and during this time are at high risk of losing their soil. Special care and management is required to prevent this.’ 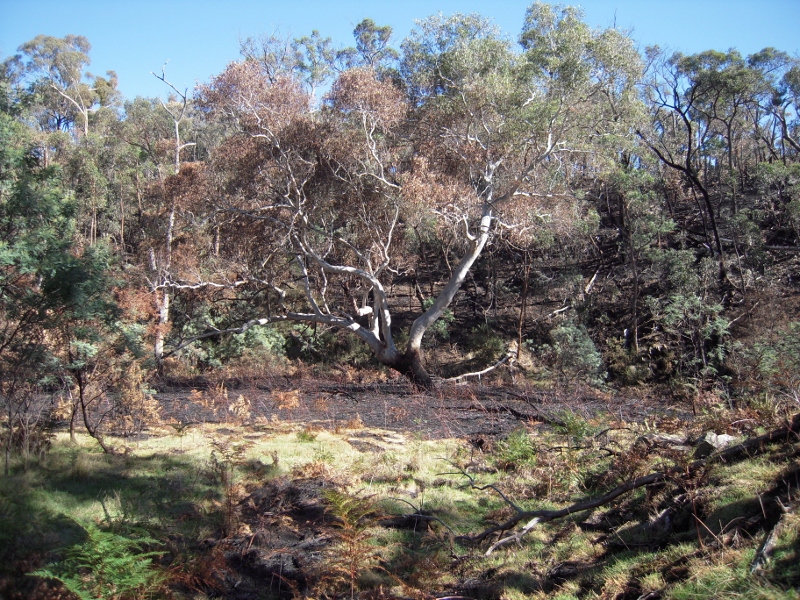 Tarilta valley floor: the left side of this eucalypt will probably die. Larger trees were destroyed.

3 Responses to Tarilta Gorge: burned off, washed away