FOBIF has made submission to Forest Fire Management’s burning proposals for 2022-5. The submission is printed below.

Our approach over the years has been to insist that all ‘fuel reduction’ exercises be carefully monitored, and that the results be used to improve future practice. This is in fact DELWP policy, but we’re not convinced that the policy is properly followed.

Let’s see how that observation translates into practice. 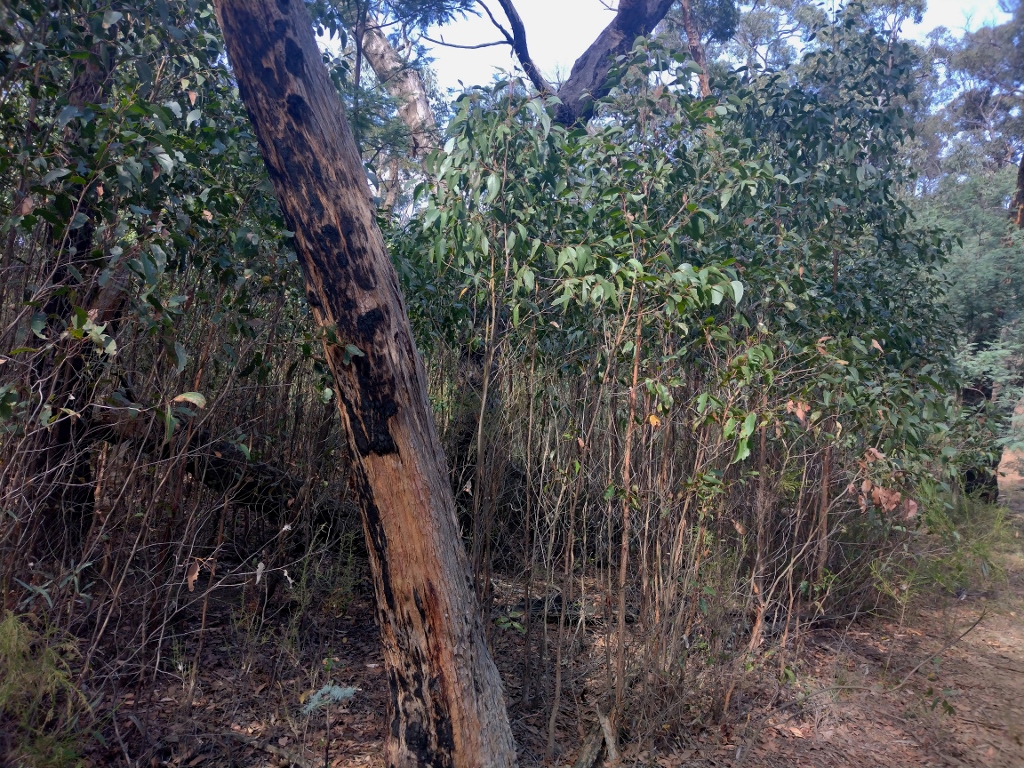 Tarilta valley, south end: we believe that the dense regrowth was caused by DSE’s 2012 ‘reduction burn’. The department believes mild fire is better for fuel reduction. We believe it’s better ecologically…but, of course, only detailed monitoring could confirm these ideas.

The submission runs as follows:

Thank you for the opportunity to respond to this plan.

Unfortunately we have observed over the years that many Department burns feature substantial areas of severe fire, including widespread canopy scorch and destruction of large habitat trees. We are hopeful that future exercises will avoid these excesses. We have a large photo file showing that in fact severe Department fire has generated massive fuel regrowth. The fuel reduction objective of the exercise is completely defeated in these cases. We are aware of the difficulties managers face in these exercises: in our opinion a major part of the problem lies in the size of the blocks to be burned. We have expressed our view on this in past letters to the Department.

Our comments on the current plan come under two headings:

A number of the proposed burns are double zones—ie, Bushfire Moderation and Landscape management. We would like to know how these exercises will be managed to get the required different outcomes, when both zones will be presumably completed at the same time.

— Wewak Track: LM-MGF-CAS-0244 seems to be divided along the Goldfields track. Is this the case? We are concerned that operations will involve a mineral earth break which, if not properly managed, will completely destroy the track as a recreational asset, and be an environmental scar.

We have already expressed our concern about the size of this burn, in correspondence with fire officers in March and April last year.

Taradale, Humboldt track: LM-MGF-CAS-0622: this zone seems to have been divided along a north south drainage line but this isn’t clear from your map. We would like to know exactly how the two sides of the zone will be managed.

—Irishtown track LM-MGF-CAS-625: we assume that the division here will be along Smutta’s track. A curiosity of this burn is that the eastern fringe of it, on your map, seems to stray into a ‘planned burning exclusion zone’. The LMZ section of this burn covers the Salters Creek valley, of obvious important catchment value, not to mention the presence of the increasingly rickety Bradfield flumes. We’re hopeful of sensitive treatment of this area.

— Bells Lane track LM-MGF-CAS-0626: this includes the recently established strategic fuel break. We are not clear as to how the SFB and the fuel reduction program work together. The Bells Lane track has been a fuel reduction corridor for decades, and we would like to know what DELWP monitoring has shown about the effect of repeated reduction exercises.

—Maldon Railway LM-MGF-CAS-0630 2023/2024: this abuts the railway reserve, one of the region’s premier wildflower zones.

We note that this area, and the public land immediately to the north of the railway, as well as the Bells Lane strip, have been listed as ‘strategic fuel reduction corridors’ since at least 2003. We would like to know what DELWP monitoring shows about the fuel loads in these two zones, as differentiated from the areas around them.

–Tarilta: LM-MGF-CAS-0628 224-5 : in our view previous burns in the Tarilta valley have not been effective in reducing fuel. If anything, they have increased it in several large sections, especially in the south end of the valley. The major fuel reduction challenge in the valley in our view is the large and increasing gorse infestation, at least partly exacerbated by DSE’s 2012 operation.

–Two burns in the Walmer State forest: Franklins track LM-MGF-CAS-0415 – 2022/2023 and Youngmans track LM-MGF-CAS-0623 2024-5 We understand the importance attached to this bush by FFMV. Nevertheless, over the years the Walmer SF has been treated very severely by the Department. We are interested in managers’ assessment of the effects of repeated burns are on both fuel loads and forest structure. In particular, we would like to know what effect past burning operations have had on populations of Grevillea dryophylla in this area.

Further, we assume that the effect of the strategic fuel break in the forest on the management burn will be monitored, and the results published.

–Taradale: LM-MGF-CAS-0629 2024-5 Salt Water Track: We assume that this exercise will be conducted with a mind to the lessons taken from the recent Kemp’s Track burn and (especially) the 2021 Wattle Track burn. In our view parts of these zones were too severely impacted. According to the Code of Practice, information gained from the Department’s monitoring and evaluation should be available to the public, but we have not seen such information, and do not know how fire officers assessed the burn. We assume that regrowth in these zones will be monitored closely in the coming years.

Finally: given that a Strategic Fuel Break is planned for the Coliban channel route, why is a zone 2 burn required for this area?