As we mentioned some weeks ago, visitors to Mount Alexander have been shocked by the tree clearance operation conducted there in the last two months. 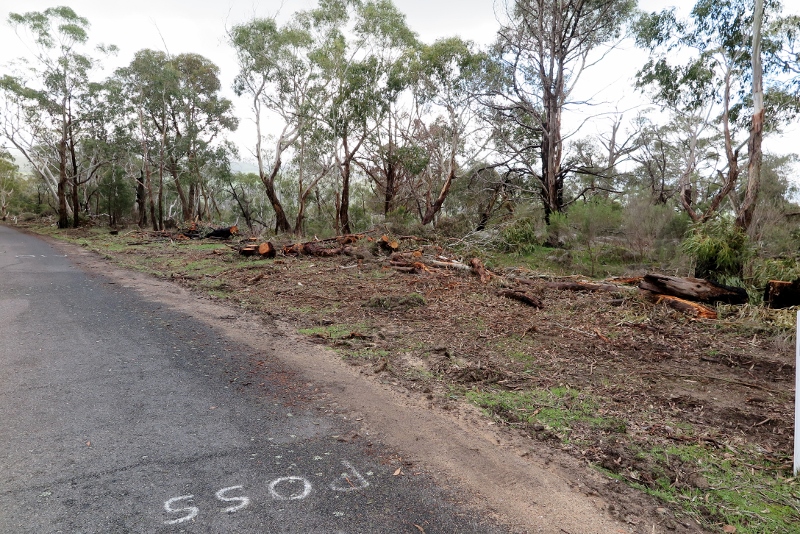 Mount Alexander: as always, the question is, could safety be achieved without environmental damage?

Enquiries as to the rationale for the works have been a bit of an adventure.

Parks Victoria assured us it was a Council matter.

Council assured us it wasn’t them and referred us back to Parks, or DELWP.

A second Parks source told us they’d agreed to the need for tree management, but it was DELWP fire managers who were responsible.

The first fire manager we spoke to told us he just arranged the contractors, but he hadn’t managed the project.

Finally, a second DELWP manager was able to give us some details. He informed us that the reason for the operation was not fire protection, but road safety. The two objectives were to remove trees leaning over the road and likely to fall; and to remove trees which reduced the parking area at the side of the road and therefore increased collision risk if maintenance workers had to stop for any reason. We’re told that a motorcyclist had crashed into one such truck forced to park in a place intruding on the roadway.

It seems that there had also been complaints by the CFA about lack of room at roadsides to manoeuvre trucks.

The overarching reason, in short, was road safety. We are assured that every tree removed was individually assessed. Any tree within 3 metres of the road, or outside that limit and ‘likely’ to fall, was targeted.

On the subject of trees leaning across the road, FOBIF understands the rationale of removal, though in the last 20 years we’ve seen nothing more than small wattles blocking half the road; and it’s quite clear that to achieve absolute safety you’d have to clear every tree within ten metres of the roadside, reducing the roadway, and the Park, to a desert. It seems to us that in many cases pruning rather than destruction would have achieved the required end…but of course that would be more expensive. The job was done by contractors, who are cheaper than a DELWP crew would have been. Would a DELWP crew have done a better job? We’ll never know.