Taking a new look at the Botanical Gardens

The Castlemaine Botanical Gardens are an important part of our community, but it’s fair to say that the flora and fauna reserve section of the gardens is a bit of a poor relation, even though it has tremendous interest in itself, being home to the Eltham Copper Butterfly.

That’s why it’s good to see the reserve get a bit of attention in the draft Conservation Management plan for the gardens produced for the Council in March. You can find it here. It’s a comprehensive 268 page document full of interesting material, and Council is looking for feedback on it by June 21. We recommend you have a go: send comments to info@mountalexander.vic.gov.au 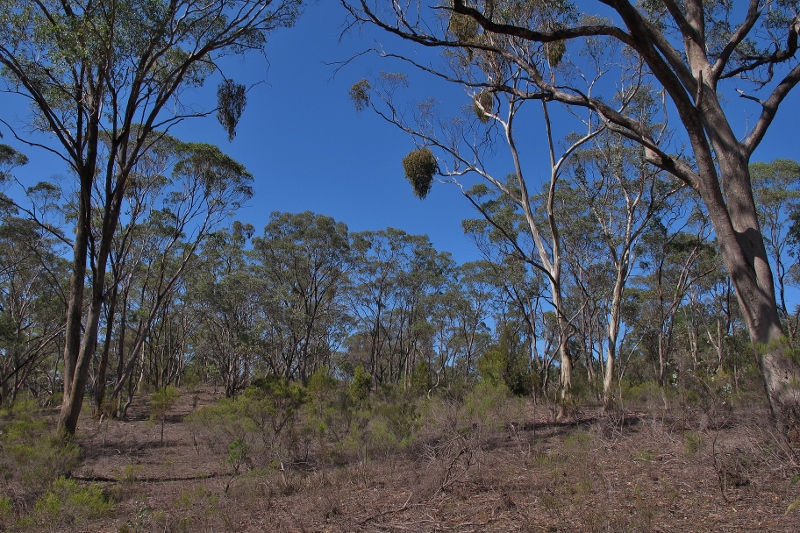 In the flora and fauna reserve, Castlemaine Botanical Gardens: the reserve is an important part of the gardens, and gets some interesting attention in the draft plan.

Presumably as part of the same process, Council has commissioned a separate management plan for the flora and fauna reserve. We’ll be following this with interest.

Among other things, the present Draft recommends renewed interpretive signage for the reserve; consideration of drought and climate change when managing new plantings in the gardens; and upstream management of the Barkers Creek floodplain to mitigate future flooding in the gardens.

Here are a few interesting passages from the draft plan relating to the reserve:

‘Floods in the early history of the gardens were likely the result of the deforestation of the surrounding landscape and the disruption of the watercourses by alluvial gold mining (the first gold discovery at Castlemaine occurred on a tributary of Barker’s Creek upstream of the Gardens). While predominantly a rural creek, development of roads and structures (including culverts) and changes to the soils produced by pasturage, cropping and the loss of woodlands have increased the volume and speed of runoff entering Barker’s Creek and reaching the site during extreme weather events.’ P 155 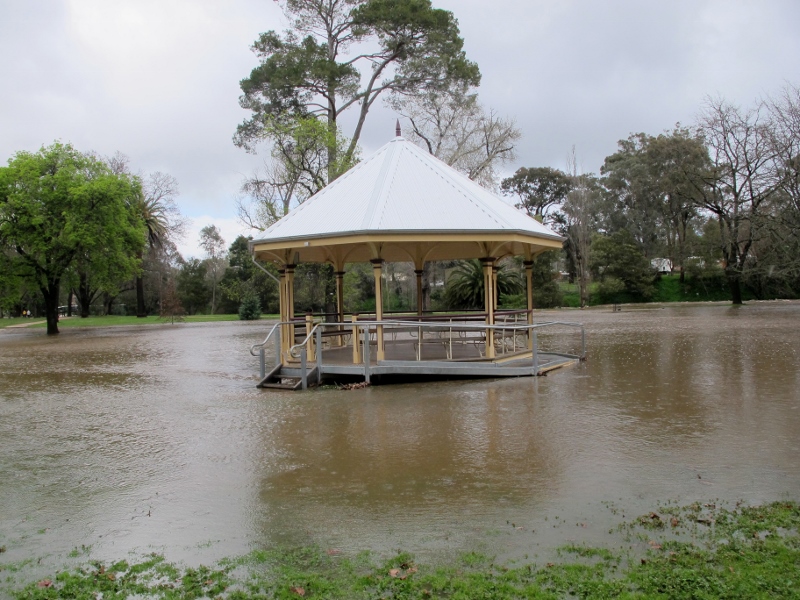 The gardens in flood, 2016: the draft plan suggests these floods might be mitigated by management of the flood plain upstream: but it should be remembered that the gardens were laid out on a flood plain, and floods are to be expected.

‘It must be recognized that the Castlemaine Botanical Gardens, by accepting relatively low-impact flooding and temporarily storing some volume of this flow, may be providing a degree of protection to roadways, buildings and infrastructure within the city downstream of the site. An alternative approach to reducing the frequency and severity of flooding at the Castlemaine Botanical Gardens would instead look upstream, to identify private lands of low-intensity or infrequent use where restoration of the original creek meanders and floodplain could provide the same surface storage (or even enhanced volumes) as that which is presently provided unintentionally by the eastern portion of the Gardens.’ P 155-6

‘Considerable scientific value is concentrated in the population of Eltham Copper Butterflies (and their flora and fauna dependencies) found in the Flora and Fauna Reserve. Conservation of this population is a Commonwealth mandate, and is dependent on both ecological management of the site and on sound decision-making with respect to the management and development of adjacent areas –e.g.the core area of the Castlemaine Botanical Gardens, the Froomes Road corridor, and adjacent privately managed lands such as the Hospital grounds.’ P 171

‘Indigenous vegetation has always played a role in producing the Castlemaine Botanical Gardens’ special character. River Red Gums blend into the exotic tree plantings all along Barker’s Creek, and the backdrop of the open woodland on hills above the site (parts of which are located within the Botanical Reserve and constitute today’s Flora and Fauna Reserve) provided context, contrast and adventure beyond the edges of the cultivated area. Indigenous plants and gardening are today a substantial preoccupation of the gardening-minded and environmentally conscious public, where native plants have been widely adopted as an ethical and even nationalist choice.’ P 143

‘It is also notable, in the context of information about the changing climate which is reviewed in the next part of this section, that local indigenous species and vegetation communities are likely to be placed under similar stress as that which is expected and already been seen in the Gardens’ exotic specimens. Higher prevailing temperatures and changes in rainfall patterns will push some species out of local niches and introduce opportunities for others which may be prevalent in neighbouring regions. The role of the place as a botanical gardens can be leveraged to explore the possibilities and ramifications of ecological adaptation, and to experiment with plants which are indigenous to neighbouring sites and regions.’  P 143-4