Mount Alexander Shire decided last week to continue using Glyphosate as part of its weed killing programs. The chemical is a constituent of the widely used weedkiller Roundup. There is evidence that, at least in some usages, it may cause serious health problems, including cancer: courts in the US have recently awarded huge damages against producer Bayer Montsanto because of the health impacts on workers heavily involved in using the chemical; and legal and political wrangles in Europe have increased pressure on agricultural producers to come up with an alternative. 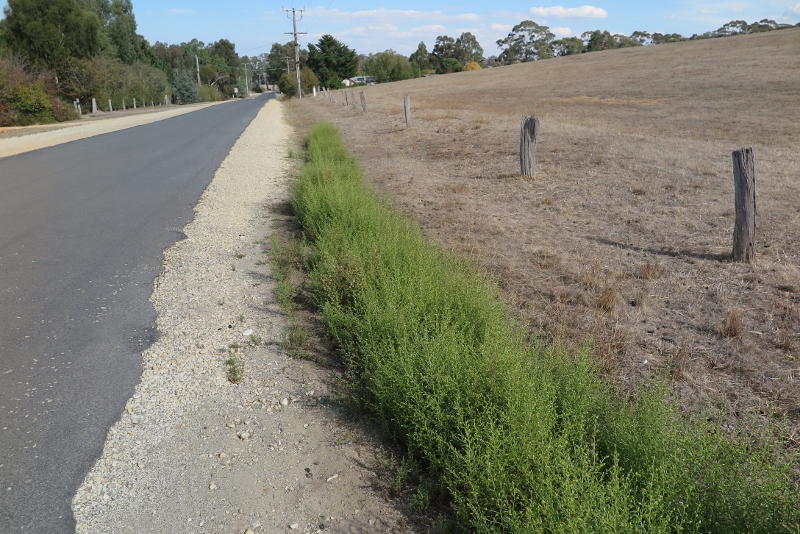 Stinkwort on a Castlemaine roadside: it’s a pity Council is controlling weeds and apparently spreading them at the same time.

Glyphosate is, however, still authorised for use in Australia, and research is not conclusive about the level at which it becomes harmful not only to people, but to soil fertility.

In the mean time, here’s a simpler weed control challenge for the shire: how about we stop spreading weeds around on our machines?

A very large proportion of local roads which have undergone works of some kind in recent years have been infested with Stinkwort. It’s very clear that the weed has been spread on council machinery.

According to the late Ern Perkins’s Castlemaine Plant List, Stinkwort ‘ is a noxious weed and listed Restricted in central Victoria.  It grows strongly during the dry late summer months when most other vegetation is dormant. The plant taints dairy products and meat, can cause stock death by poisoning and bowel damage by the fluffy seed heads, and can cause dermatitis in humans.’

FOBIF has been hammering this drum for nearly ten years now. Protocols for cleaning machinery are pretty accessible. We’ve written to Council to suggest they be acted on.