Another reason to slow down…

Travellers on the Pyrenees Highway east of Newstead will have noticed that work is under way on Vicroads’ wire rope project. A last minute series of meetings between local residents and road engineers has failed to bring any further modification to the project, which will involve significant vegetation removal.

Discussions are ongoing on possible speed reduction changes on this winding stretch of the highway, notable for animal crossings. Vicroads, as in the past, is curiously reluctant to reduce speed limits on its roads. We thought we’d just offer another reason to take the matter more seriously.

The photo below shows an Australian Common Longnecked turtle rescued from the road in Strangways. The mud on the shell suggests that the turtle had just come out of a local dam and was perhaps looking for a better refuge nearer the Loddon. 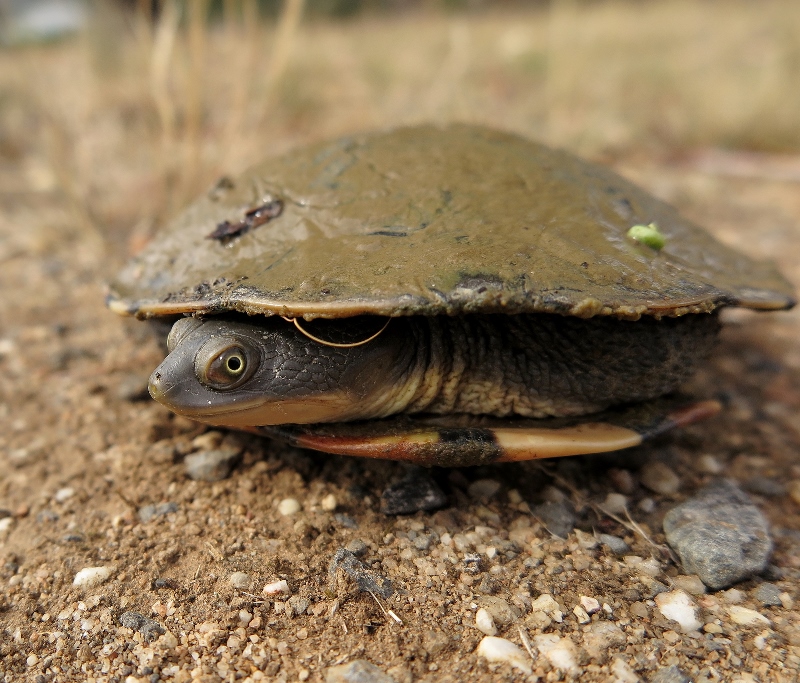 The Bendigo Field Naturalists’ excellent Frogs and Reptiles of the Bendigo district says of this species, ‘It can live in semi-permanent waterholes and survive summer drought by digging into soil or leaf litter of drying water bodies and aestivating. Alternatively they go in search of a better water body, a behaviour that leads to them being killed on roads and trapped by fences.’

In this case the driver was able to avoid the turtle because he was travelling relatively slowly. As we’ve pointed out before, the animal carnage on our roads is eloquently present in the form of many corpses, most visibly of kangaroos and wallabies. Smaller animals aren’t so obvious, but they are there.

Another reason for slowing down, especially on minor roads.

1 Response to Another reason to slow down…