A model project: Vicroads ready to start on Pyrenees Highway

A well-attended meeting in Newstead last Tuesday was told that Vicroads’ Pyrenees Highway tree removal and wire rope barrier project was about to proceed. The meeting was therefore a briefing, not a consultation: it was not going to change anything essential. Engineers were put through the wringer by resident questions, but there was an air of fatality about the proceedings. 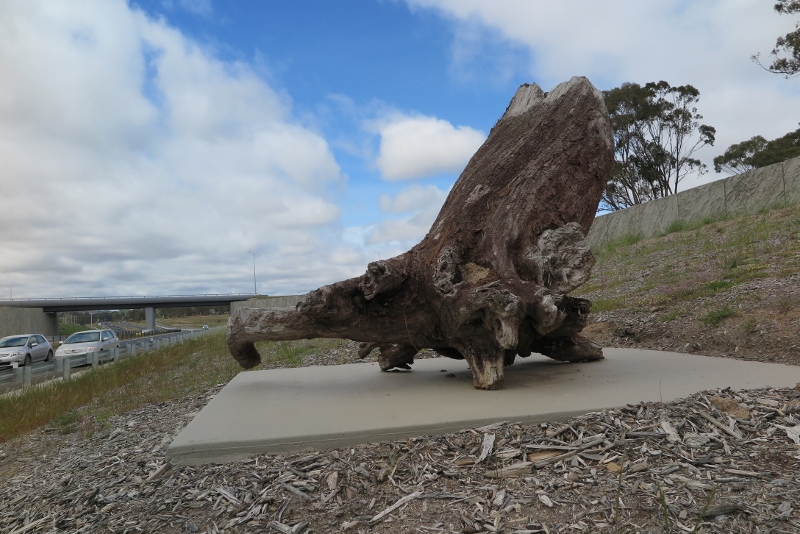 Strange monument at the Ravensood interchange, Calder Freeway: is this a symbol of the relationship between human beings and the environment? Nearly 2000 trees, many of them ancient,were destroyed for this project. It will take several hundred years for the ‘offsets’ planted to replace them to come anywhere their size.

Although Vicroads has made some compromise on its original proposals of two years ago, its project  is essentially the same. Questioned about the ultimate rationale behind it, engineers cited ‘modelling’. This modelling was unexplained, but– it is claimed–it shows that reducing the speed limit on the highway would have some beneficial effect, but wire ropes and tree removal would have more. Against a background of repeated campaigns to persuade us that ‘speed kills’ and that we should ‘wipe off 5’, this claim was greeted with scepticism by your FOBIF correspondent.

Engineers were also quizzed about the actual rationale behind the project, justified by accident statistics involving one fatality not related to the road condition. They were unclear in their responses to these questions, arguing that their role is implementation, not the justification of the project.

There has been some confusion about this project over the years. For example, we were told two years ago that rumble strips had been removed from the project for cost reasons. Last Tuesday, however, we were assured that they are well and truly in it, though it’s not clear whether centre of the road plugs will be installed. And it seems possible that a speed limit reduction will be ‘considered’.

All this is against a background of far more serious Vicroads atrocities around the state, especially on the Calder at Ravenswood and the Western Highway west of Beaufort. No one disputes the need for safer roads: but it seems that in pursuit of this end environmental concerns are froth to be run over by the bulldozer. We assume that authorities would not demolish Saint Paul’s Cathedral to improve safety in the Melbourne CBD; they don’t have too much trouble obliterating thousands of trees, many of them hundreds of years old, in pursuit of the same end.

Vicroads has undertaken to run a further ‘consultation’ soon. It’s fair to say that the Vicroads personnel at these meetings are unfailingly professional and courteous. The problem seems to lie deeper: that in any consideration of land management (water, fire, roads…) the environment comes off second best. That chicken has still to come home to roost.

3 Responses to A model project: Vicroads ready to start on Pyrenees Highway