This year has been the worst on record for drownings of native water rats, and the second worst for platypus.

According to DELWP, an average of five platypus are drowned per week in Victoria, victims of illegal or inappropriate yabbie nets. One of the culprits is the ‘Opera house’ net, which traps air breathing animals, stops them from surfacing, and drowns them. An alternative, appropriate net would have an open top, allowing the animal to escape.

It’s illegal to use the Opera net in public waterways, but has been legal in private water: however, from July 1 next year, it will be illegal to use it in all Victorian waterways.

So it was a bit of a downer to find one of our local stores offering Opera house nets for a bargain price before Christmas. Nothing illegal about it, of course…up to next July. But maybe not a great Christmas gesture for one of Australia’s most remarkable creatures. 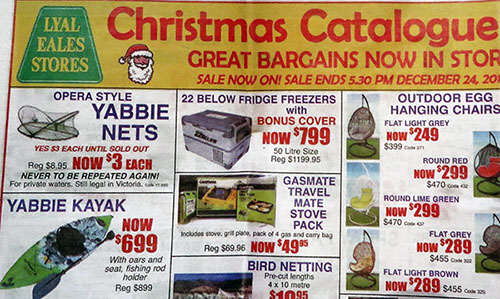 By the way, there are heavy penalties for taking protected wildlife, or using prohibited equipment in public waters: nearly $39,000 and 24 months jail.

1 Response to A Killer Christmas bargain