Jaara history: a way to the future? 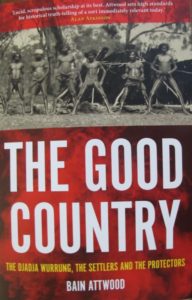 Indigenous history shouldn’t just be the archaeology of a society frozen in the past: it should open up ‘glorious’ prospects: of a time when indigenous people will be accepted as leaders in this community. This is the view expressed by Rodney Carter, CEO of the Dja Dja Wurrung Aboriginal Clans corporation last Friday.

Mr Carter was speaking at the launch of Bain Attwood’s book The good country in Castlemaine. The Phee Broadway theatre was full for the launch of this important local history, and those present were privileged to witness an interesting contrast in styles, between the eloquent brevity of Jaara speakers Uncle Rick Nelson and Rodney Carter, and the more academic presentations of author Bain Attwood and presenter Dr Rani Kerin.

The good country: the Dja Dja Wurrung, the settlers and the protectors, is the first full length history which tries to give a voice to the Jaara people as active agents in the epic social changes of the nineteenth century. Without avoiding the reality of violence and dispossession, it tries to show how indigenous people reacted with intelligence and flexibility to the overwhelming forces ranged against them: in other words, it retrieves their lost voices, and shows them actively engaging with the new society being created on the ruins of their culture.

Rodney Carter’s brief response to the book concentrated on its epilogue, in which Attwood sketches out some differences between mainstream scholarly history and Jaara interpretations of the colonial past. Attwood argues for a ‘shared histories’ approach, in which contending views of what happened, and how it happened, can fruitfully interact to the benefit of both visions. History, as Rani Kerin pointed out, may inevitably be a messy business, continually revised. It occurred to this reader that Jaara interpretations of their history, while contestable in some details, are bang on in the main line of their narrative: dispossession is a fact. This book is not comfortable reading, but it provides many new and interesting insights into a subject too often smothered in stereotypes.

The good country is published by Monash University Press, and is available from bookshops for 29.95

1 Response to Jaara history: a way to the future?