What can we learn from the ruins?

FOBIF has made a submission to the process of updating the Castlemaine Diggings NHP Heritage Action Plan [now known as the Heritage Landscape Management Framework].

Our view can be roughly summed up in the words of the old Heritage Plan: ‘The current forest setting is not an interpretive problem, but rather an interpretive bonus for the Park. It highlights the transience of mining, demonstrates the severe environmental impact that can result from inadequate environmental constraint, and illustrates some of the resilience of Australia’s native vegetation.’ [Our emphasis] 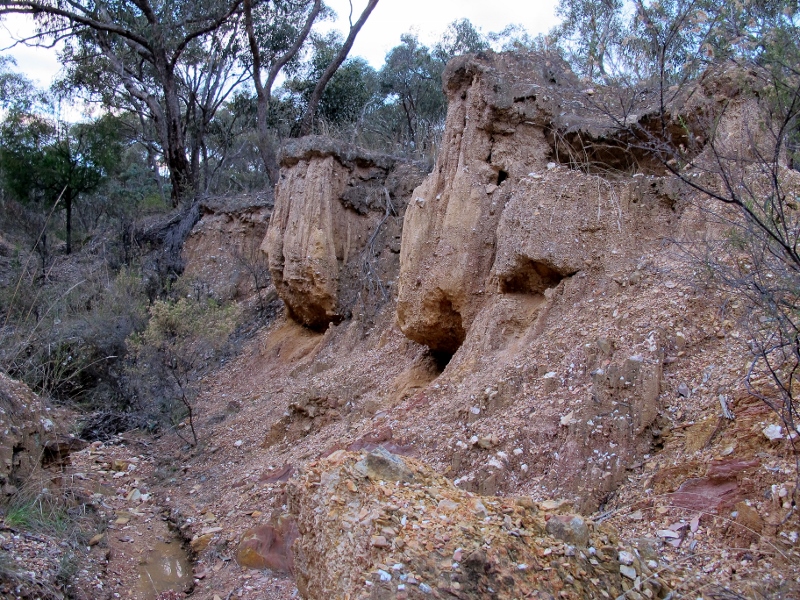 In Norwood Hill. This is not a natural scene, it’s part of our cultural history: the destruction of our waterways is part of the epic of gold, and needs to be explained to visitors.

The essentials of FOBIF’s submission are set out below:

We hope the comments below do not come across as too negative. There is much in the distributed material that we like, and as residents of the goldfields we are obviously grateful inheritors of the gold rushes. However, we think a revision of heritage ideas in this field would not only be a more faithful account of what we’ve inherited, but it would make the presentation more dynamic and interesting.

We don’t have the time to provide a detailed comment on this material, but would like to offer the following:

Please note that the online respondents’ distinct emphasis on enjoyment of the natural attributes of the Park marks a change in the public’s perception of the park. While visitors still appreciate the historic feel of this landscape they are increasingly sensitive to things like seasonal wildflower displays, and curious about what the landscape was like before the deep scarring evident in dry gullies.

We offer these comments in the belief that the failure to integrate consideration of landscape with interpretation of mining ruins leaves a disturbing vacuum in the process. VEAC’s Historic Places draft, in its brief discussion of Aboriginal heritage, correctly laments the failure to communicate the ‘layers of experience at sites that are rich with Aboriginal heritage.’ A similar failure is inevitable when landscape is ignored as ‘heritage place’: the need to understand  the layers in the landscape of the goldfields—what it was like before the gold rushes, during their heyday, and the land’s long, partial recovery since—disappears when visitors are encouraged only to focus on methods of mining, and the social realities it revealed.

There are serious implications here for the way this particular heritage place is managed and promoted. For example, the Park’s management [2005] plan envisages that over the years the park will carry a ‘more appropriate balance of juvenile, intermediate and mature trees’—in other words, that it might return to something more like a pre 1852 landscape.  Given that fire practices over the last 10 years have tended to destroy large numbers of mature trees, you might say that such practices have heritage as well as environmental implications. The Environment Protection and Biodiversity Conservation Act requires that any action significantly affecting areas listed as national heritage needs ‘prior approval’: we suspect that approval for fire activity in the Park has only been sought in connection with goldfields ruins, and that no consideration has been taken for the landscape impacts of such activity.

Is ‘heritage’ just a nice lot of old stuff we can look at and be nostalgic about? Or is it something more challenging? The 2014 Parliamentary enquiry into Heritage and Ecotourism quoted the National Trust, as follows: ‘The existence of heritage, its protection and its connection with the community does not guarantee that it will attract tourists. A sanitised heritage presenting a safe interpretation of history and culture holds little appeal and will not generate interest amongst tourists.’

The current Heritage action plan for the park offers this challenge: ‘The current forest setting is not an interpretive problem, but rather an interpretive bonus for the Park. It highlights the transience of mining, demonstrates the severe environmental impact that can result from inadequate environmental constraint, and illustrates some of the resilience of Australia’s native vegetation.’ [our emphasis]

If the present revision falls back from this challenge, we will end up with a plan which, after all the work done on it, will be inferior to its predecessor.

2 Responses to What can we learn from the ruins?