A recent visit to our local patch and bush cubby saw a near miss for me and the realisation that the bush in Campbells Creek seems in distress. On our way up the trunk of our unusual, almost horizontal Candlebark ’friend’, my daughter said, “Mum look out, don’t touch!”

Her six year old eyes, sharper than mine, had spotted a Cup Moth caterpillar or Doratifera sp.

She was right in warning me, the caterpillars, often known as ‘stingers’ or ‘stinging joeys’ have  spines that can inflict a sharp and painful sting, rather like a nettle. When I looked around I noticed there were many caterpillars of the same species heading up the trunk and into the canopy, which appears much more open than usual, presumably they were heading for lunch. 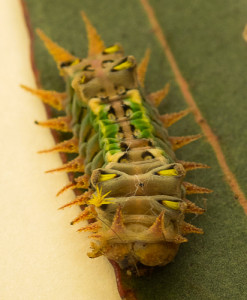 Cup Moths are forest insects and at times have been responsible for severe damage to Eucalypts in Victoria. Sometimes they also become pests on garden trees, especially fruit trees such as apricots, apples and cherries. Back in August 2012 FOBIF reported finding the Cup Moth in a large tract of defoliation in the south end of the shire.

Cup moths belong to a small group of moths that have unusual slug-like caterpillars with clusters of spines on their bodies that are often beautifully marked and coloured. Their name comes from the cup shaped cocoons made by the caterpillars when they pupate.

Young caterpillars feed by skeletonising the leaves while older caterpillars eat the whole leaf often leaving only the midrib. 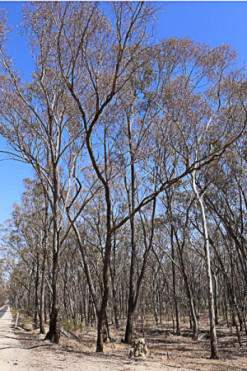 Defoliated trees along the Castlemaine-Muckleford-Road

It is the caterpillar (larval) stage that causes the damage. Many leaves are completely or partially eaten and many more are cut off and fall to the ground. Caterpillars are usually present in small numbers but sporadic outbreaks may cause severe damage with trees completely defoliated over a large area. However, unless attacks occur over 3-4 successive years the trees usually recover.

Long time resident the late Doug Ralph responded to our 2012 post by recounting an outbreak ten years prior and a long break in occurrence in between. These recent attacks coupled with the very dry weather though may have a more serious effect on the health and survival of the trees.

Cup Moth caterpillars are very susceptible to viral diseases and sometimes entire populations are killed. Viral disease is the most common natural control of Cup Moth caterpillars. Outbreaks of disease usually occur when weather conditions are warm and humid and when there is overcrowding and shortage of food. Affected caterpillars stop feeding and the body swells with the body contents liquefying and the skin eventually splits and releases the contents over the leaves. Other caterpillars can then become infected.

Natural predators can include parasites, wasps, flies and occasionally, birds.

It is distressing to see the damage done by these animals. Coupled with an asset protection burn and drier weather, the bush in our patch at Campbells Creek seems to be really up against it. I wonder what changes my daughter will see as we continue to visit our cubby into the future.

This post was written by Naomi Raftery with most of the factual detail provided by Marie Jones. If readers have any further information on cup moths or would like to share their stories of personal encounters with them we welcome contributions.