The beautiful creature pictured below is an early instar caterpillar, from the genus Doratifera, probably Doratifera oxleyi. These moths are commonly called cup moths. It was found in suspended by a thread in an area of severely damaged bushland in the Diggings Park this week.

Cup moth caterpillar: It’s less than a centimetre long, and you can’t deny it’s pretty— but don’t touch it! We’re not sure if it’s the creature that’s eating our bushland. Photo: Bronwyn Silver, 14 August 2012

Cup moths Cup moths ‘belong to a small group of moths that have unusual slug-like caterpillars that are often beautifully marked and coloured. They derive their name from the cup shaped cocoons made by the caterpillars when they pupate. There are several different species of cup moth that feed on eucalypts and other native plants. The caterpillars differ in colour, pattern and size but they all have the characteristic slug-like appearance with clusters of spines on their bodies. The spines can inflict a sharp and painful sting, rather like a nettle and the caterpillars are often known as ‘stingers’.  The stings may cause local inflammation if they touch bare skin.’ [ref: Department of Primary Industry, SA]

We mistakenly reported last week that the enormous damage inflicted on eucalypts in the south end of the Shire was caused by lerps. Now we believe that the damage is caused by a leaf miner of some sort, and have suspicions about the cup moth–but we’re not sure. Theories are invited. 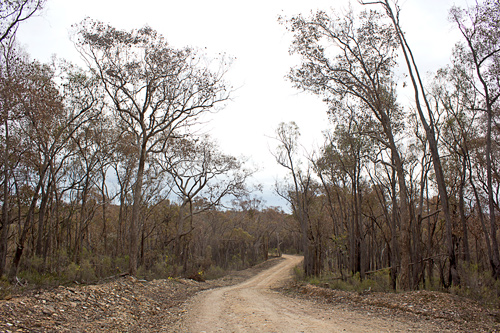 Porcupine Ridge Road: eucalypts in the South of the Shire are being devastated by a leaf eating creature. Photo: Bronwyn Silver, 14 August 2012