Trail bikes [2]: the sad reality of good ideas never to be implemented

The intrusion of trail bikes into a peaceful bushwalk [see above] is nothing new: so, shouldn’t we just get used to it? Isn’t it just part of sharing public land with different types of users?

Anyone familiar with our bushlands over the last decade or two will have noticed the relentless illegal intrusion of motor bikes into the remotest areas: the Columbine and Tarilta Creek valleys, for example,  two areas previously free of the machines, are now scarred by churned up illegal tracks. 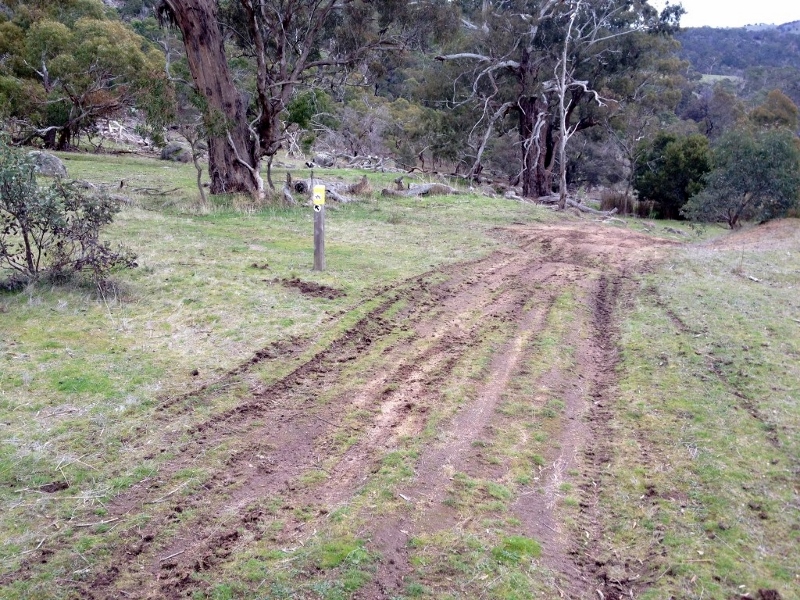 Moto and 4WD curse attacks  Mount Alexander: Ballantinia Track at the Goldfields Track junction. There’s no lack of good ideas about preventing this kind of damage. What’s lacking, as usual, are the resources. Photo: Andy Bos

The latest area to suffer invasion is Mount Alexander Regional Park, where new tracks have appeared in the last six months, accessed through cutting through fences. In particular, the Ballantinia track seems victim to both motorbike and 4WD incursions.

What can managers do about this kind of activity?

Over the years we’ve seen a few initiatives taken by local councils, Park and Forest authorities to deal with trail bikes in particular. Here are some recommendations from the 2005 DSE Trailbike Options Paper: close off illegal tracks as soon as they’re made; invest in education; engage with riders; work with manufacturers and the retail industry to encourage appropriate marketing; provide alternative, properly managed venues…There have been calls for increased patrols, and even impoundment of bikes.

Great ideas, some of them. But the problem keeps getting worse. 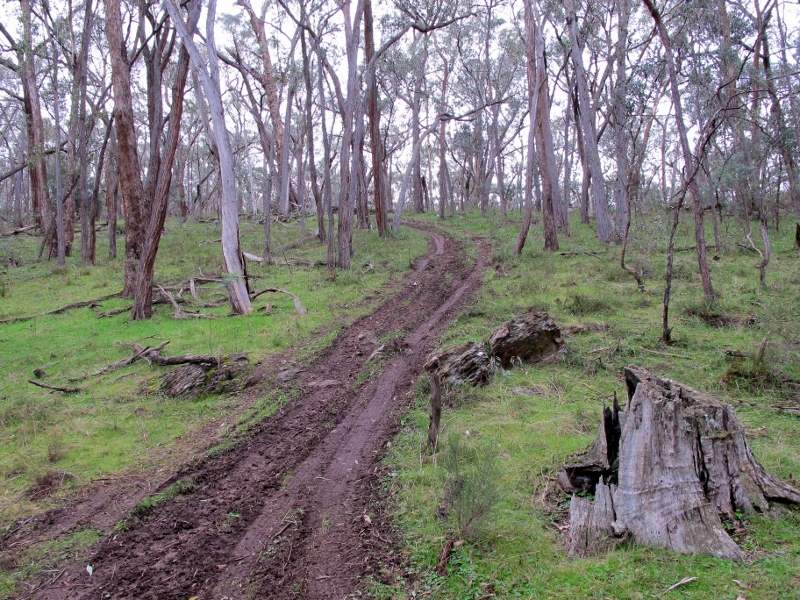 New track gouged through previously untouched section of the Columbine Creek Valley. The solutions to the problem aren’t cheap, but maybe tackling the manufacturers and retailers wouldn’t be a bad start.

Why? Well, for a start, all of the options cost money, and that’s the one thing Governments aren’t prepared to put into the process. What we seem to have ended up with is a series of policy documents, and A4 leaflets weakly urging riders to stay on roads and ride quietly. The writers of these documents don’t seem to realise that trail bikes aren’t made for people to cruise sedately through the woods checking out the wildflowers. A quick check of any dirt bike magazine will show you what they’re really for: adventure experience which is very hard on the earth. Although these magazines are mainly concerned with legal motocross competitions the style is essentially the same as that engaged in by bush trail riders. Only the intensity is different.

A 2009 Queensland investigation found that 70% of surveyed riders admitted to riding illegally [the figure rose to 80% with younger riders]. Their reasons included: it’s convenient, there are fewer people, and it’s a more natural environment. Asked if they had concerns about this illegality, they highlighted the danger of irresponsible riders…Among 12 such concerns, however, ‘negative environmental impacts’ was listed 12th.

Clearly, there’s a cultural problem: the large scale manufacture and promotion of vehicles designed to be used ‘off road’, and a widely promoted image of these vehicles as enabling a driver to get away from it all, to conquer nature.

Anyone who’s watched free to air football on TV will have noticed the number of commercials promoting four wheel drive cars. These almost all show the vehicles plunging through creeks, churning up dust on desert roads, tearing along a beach, or rolling off road across grassy plains to a nice view on a remote cliff top. Dirt bike magazines show photos of riders negotiating narrow, churned up bush tracks. A recent bike review in Dirt Action magazine comments how well the reviewed bike works in the bush. An accompanying photo shows a rider sending up an almighty cloud of dust. The message is pretty clear.

Although the vast majority of 4WD users probably use their car no more adventurously than to drive to the coffee shop, there’s no doubt that the appeal of these vehicles is at least partly built on the image of the pioneer getting into nature and giving it a bit of a beating: and there’s absolutely no doubt that a small but significant proportion of users take this image seriously enough to make a point of taking their cars out into the bush to push the boundaries a bit, or even a lot.

But cars are nothing, in our region, compared to trail bikes. The damage they do, the annoyance they cause, are well documented. The problem has been researched, and the solutions put up. It’s about time they were taken seriously. And maybe a good place to start would be to bring heavy pressure on advertisers and retailers to stop promoting irresponsible behaviour in our public lands.

4 Responses to Trail bikes [2]: the sad reality of good ideas never to be implemented