Sometimes you wonder: who’s doing the most damage to our bush?

FOBIF has been getting numerous reports of roadside vandalism by both private and public operators. Walkers on FOBIF’s Tarilta excursion noticed more DELWP scouring on the Porcupine Ridge road last week, and this week we found numerous scalped verges on extremely minor tracks in the Fryers Flora reserve, including stretches where patches of Grevillea obtecta [Fryerstown grevillea] have been dozed under]. This plant is listed as ‘rare’ and ‘near threatened’ in Victoria in the Atlas of living Australia. 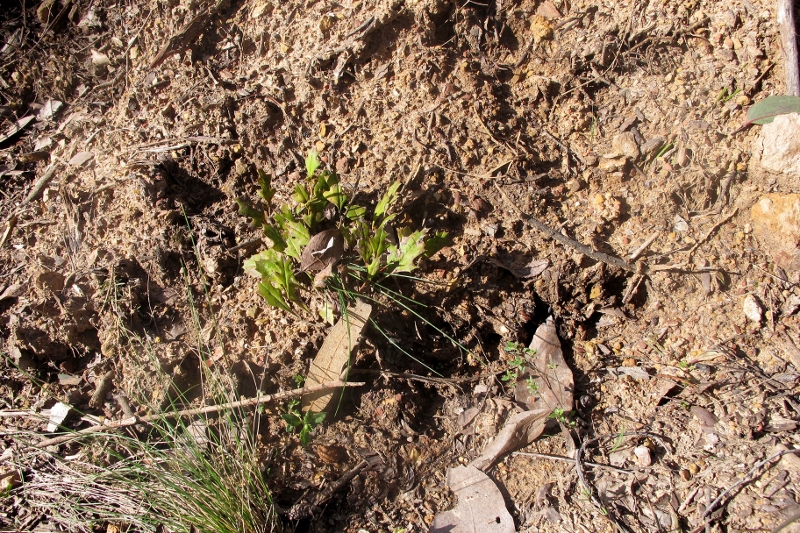 Survivor: a small bit of Fryerstown Grevillea pokes out of scoured ground  in the Fryers Flora reserve. Swathes of the rare plant have been gouged out along this and nearby tracks.

With the best will in the world, we can’t see how this kind of work is necessary. A lot of it has nothing to do with ‘sight lines’ or anything else to do with safety: it’s clear in multiple cases that a tree needed to be removed, but instead of getting a chainsaw and cutting it off at the base, the operator has just dozed it into the bush, taking numerous other things with it. This is a crude time and energy saving measure, which, in turn, is a money saving measure.

And there’s the rub: the excuse we’re constantly getting is, ‘we can’t do any better with the money we have.’

We suspect that another reason is that the operators are neither properly briefed nor properly supervised. And we’re getting increasingly cynical about bland fob offs, along the lines, ‘Maybe it could have been better done, and next time…’ On track management, ‘next time’ is rarely better.

On the matter of money, we’ve put that question to the Minister, and we’ll report her answer when we get it.

1 Response to Sometimes you wonder: who’s doing the most damage to our bush?