Eight families from across Castlemaine came together to hear about restoration work and environmental values at the Clinkers Hill Bushland reserve on Sunday the 26th April. 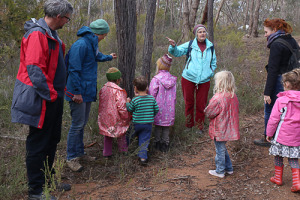 Elvyne explaining how to identify a Stringy Bark.

Elvyne Hogan gave an introduction to the site, outlining work done by the Victoria Gully Group, showing little ones which species of eucalypt that occupied the area lead to funding for a project with Connecting Country through their Yellow Box Woodland program.

Cassia Read then introduced the children and adults to the Cherry Ballart and collected insect galls which shortly afterwards became bush creatures with the addition of feathers, leaves and sticks found on site. After a snack and cuppa the children were encouraged to find some ‘habitat’, a big word when you’re four, for their creatures.

Kids and adults enjoyed the bush and company of other like minded families. 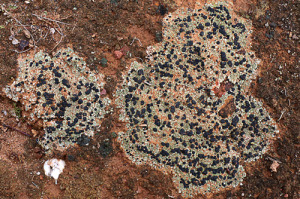 A lichen that Cassia pointed out on the walk back.

On the return walk Cassia contiuned to share her knowlege about the plant and moss species found in the reserve.

Thanks to Elvyne and Cassia for their time in presenting to our small people and their families. 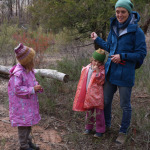 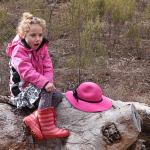 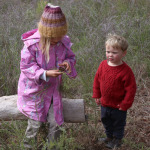 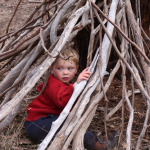 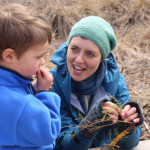 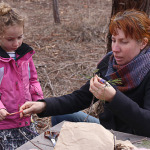 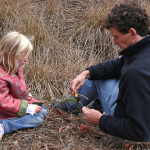 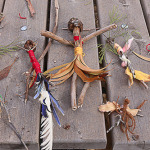 1 Response to Kids walk and craft at Clinkers Hill