The Hawkeye fire research program, established as a response to recommendation 57 of the Bushfires Royal Commission, has now come to an end. It will now ‘transition’ into research programs run by DEPI. It’s not exactly clear what this transition means, in terms of research budgets or the continuing involvement of researchers; in the meantime, the program has established some solid foundations which could prove extremely useful to future research.

The end of the program was marked by a symposium at the Arthur Rylah Institute last week, in which researchers gave brief accounts of their findings. Here are a few examples: 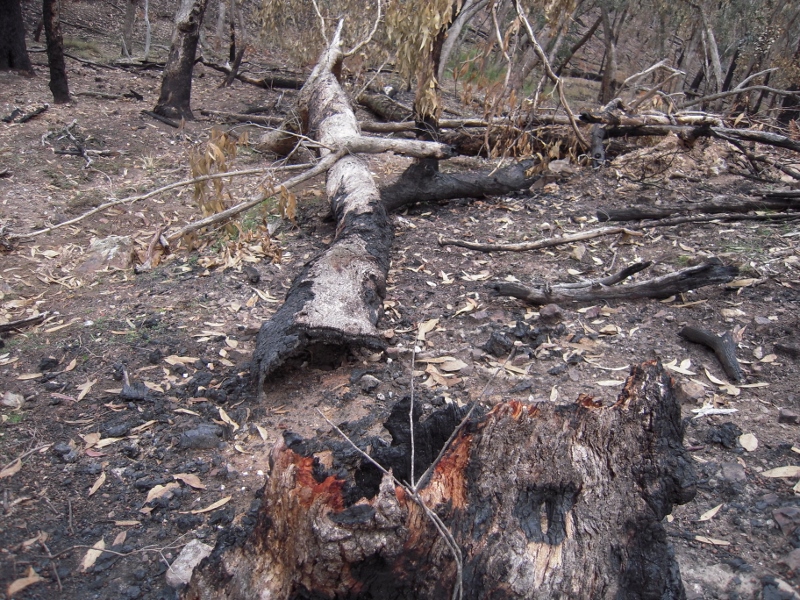 Hollow bearing tree brought down by management fire, Tarilta 2012: research has confirmed that such trees are 22 times more likely to collapse after management burns.

• The Mallee Hawkeye program found that present fire regimes are incompatible with the survival of some species. Many threatened species require bush unburned for periods of 50 or 100 years. Current targets will mean that within a couple of decades almost all Mallee vegetation will be less than 20 years old. This has the potential to do long term or permanent damage to ecological systems in the Mallee. This research is in line with what many ecologists have been saying for some time.  It directly contradicts the Victorian Government’s claim that you can simultaneously run a ‘risk based’ fire policy and a five percent burning target policy. The two policies are incompatible.

• A Gippsland program found that Hollow bearing trees are 22 times more likely to fall down in fuel reduction zones than they are in unburnt areas. This is the first research done on the problem of collapse of hollow bearing trees, though there’s plenty of anecdotal evidence that management burns are unintentionally bringing down ecologically important trees—you can find some of it on this site. Of course, Gippsland forests are very different from ours, but you would think that hollow bearing trees are much scarcer here, because of our particular history of clearing.

• Research into invertebrates shows that three years after a fire, depth of litter on the forest floor in burned areas is similar to what it is in adjacent unburnt areas. This is because of the effect of fire on detritivore invertebrates which break down 30% of litter [the rest decomposes via microbial action]: fire might consume the litter, but it also consumes the creatures which would have reduced the subsequent build up.