What are our ‘high value ecosystem areas’ [and how do we know?]

On Monday August 25 the Department of the Environment and Primary Industries hosted a meeting with representatives of enviro groups from the West Central Risk Management area.

The point of the meeting was to discuss current and future fire planning in this area, which extends from north east of Huntly to south west of Ballarat, and includes Werribee, the Macedon Ranges and Sunbury. Given that only about a dozen community representatives were able to attend [most of them from the Mount Alexander region] the meeting didn’t actually represent environmental groups of communities throughout this area. 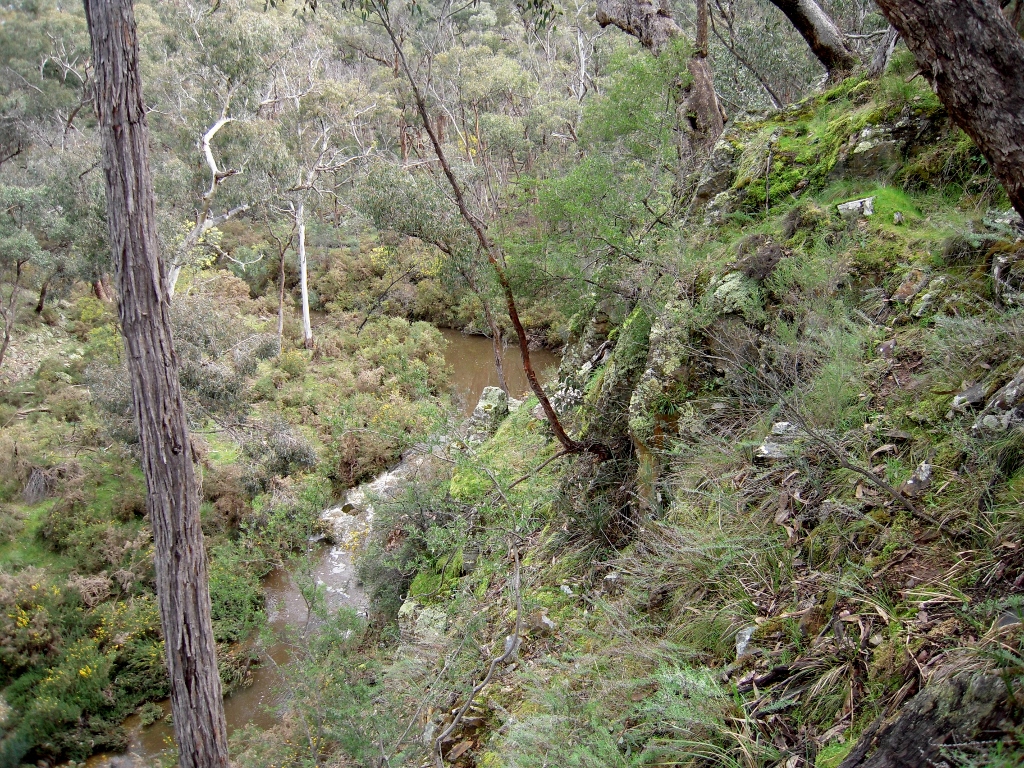 Middleton Creek, declared a ‘high value ecosystem area’ in the government’s risk management strategy. Here’s a question: is ‘risk management’ compatible with a blunt policy of burning five per cent of public land?

As we have reported previously, the Department is talking a lot about ‘risk management’, the approach which, it has been hinted, may take over in fire protection from the very crude and destructive ‘five per cent’ approach, which has involved trashing huge areas of Victoria to no good effect.

Risk management was the talking point at Monday’s meeting. It’s been hard to find out exactly what this means on the ground, so the big achievement on Monday was the unveiling of a map of the area identifying assets for which serious risk assessments are to be made for the purposes of strategic bushfire management.

From our point of view, the interesting part of the briefing was the nomination of four ‘high value ecosystem areas’ in our region: Mount Alexander, Muckleford forest, a section of Kalimna Park, and a section of bushland apparently encompassing parts of the Tarilta valley and the south end of the Diggings Park near Middleton Creek and Wewak Track.
While we don’t dispute the value of these places, FOBIF representatives at the meeting couldn’t figure out the criteria whereby they, and no other places, were so nominated. The decision making process was outlined, but without access to the supporting documents attendees found it hard to judge this process.

The crude maps supplied by DEPI, for example, seemed to show that the nominated section of Kalimna does not correspond to Eltham Copper Butterfly colonies, which should be a major reason for the park’s special treatment.

The Muckleford Forest section includes areas severely burned in 2012, and others slated for future burns.

And the Tarilta-Middleton Creek area includes sections trashed by DSE in ‘control burns’ in recent years. It also includes the Amanda’s Track area, slated for burning in the current Fire Operations Plan.

In its submission to the Fire Operations Plan FOBIF requested that risk assessment be done of large area burns before any burning, and we’re now a bit more hopeful that this will take place, at least for Muckleford forest and Amanda’s track. At the moment, however, we’re not sure how the Department sees the connection between ‘high value ecosystems’ and management burning regimes. As our readers will know, we’ve been in the dark about this for years, given the Department’s unwillingness to show us their burn plans.

We support any process which involves looking closely at the landscape to see what’s valuable and how it can be best managed. For that reason we see positive potential in the risk management approach, and we’ll look for clarification on the matters we don’t yet understand.

We are, however, disconcerted by apparent inconsistencies in DEPI procedures. For example, the meeting was told that the Minister will release three risk landscape strategies in September. And yet these plans, already in the Minister’s ‘In Tray’, do not appear to have influenced the current draft FOP 2014-2017.

Why? Probably because the FOP is largely determined by the very large elephant in the room at this particular meeting— the five per cent target. DEPI can’t discuss this– though you get the feeling some managers would dearly love to stick the boots into it. It’s hard to find anyone involved in land management who thinks it’s a good program. The only people on the planet who support it, it seems, are the State Government [with a mixture of aggression and evasiveness], and the Opposition [which seems to be too scared to say anything about it].