‘I like ants and this talk is about why you should like ants.’ That’s how entomologist Alex Wild started his talk to his audience of 140 at the Newstead Landcare event on Sunday.
In a hugely entertaining talk, peppered with questions from the audience, Alex ranged widely over matters to do with ants, structured around the ‘three reasons why ants are important, and why they run everything in Australia’. 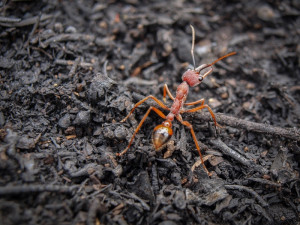 Bullant [genus Myrmecia] exploring a DSE ‘control burn’ in the Diggings Park, 2010: ants are not only intriguing, they’re good for the soil. Almost all bullant species are endemic to Australia. Photo: John Ellis

First, they eat practically anything, and therefore channel biomass around; second, they dig down sometimes to surprising depths, aerating soil and allowing water penetration: in a dry climate they are more important than earthworms, and there’s strong experimental evidence to show that they increase crop yields; and third, they are so numerous that many other organisms are dependent on them for survival, for one reason or another.

Among many other fascinating observations about ants, their social organisation and their territorial wars, Alex pointed out that feral scourges like the Argentine and Fire Ants flourish in disturbed situations: the implication being that looking after the environment is a sensible preventive measure against foreign invasions. And he finished by showing a common enough picture of a bush track, with the comment: ‘There are probably 100 species of ants in this picture.’ Enough reason for us all to pay more attention to the detail: and one way to do this is by checking out the CSIRO’s Ants Down Under website.