When John Ellis and Marie lifted the top of their BBQ recently they exposed an impressive construction. A mud wasp had built a nest with cubicles and it was filled with live, paralysed prey for its larvae to feed on.

Geoff Park helped with identification: the spiders that mud wasp had collected were mainly flower spiders. A few days ago  Geoff had photographed  a pardalote feeding on the same species. (See Geoff’s post here.) Photos of flower spiders in happier situations can be viewed on FOBIF’s flicker site. 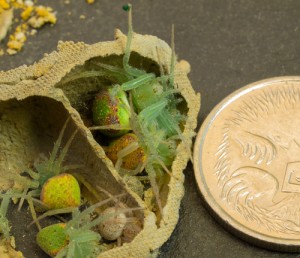 Mud wasps are solitary insects and the nest is constructed by a single female wasp. They are often found locally in all sorts of cavities and on buildings as well as tree trunks. The size of the nest is illustrated in the photo on the left.

A CSIRO pamphlet describes the life-cycle: Typically, the female wasp catches a particular insect or spider … then stings and paralyses it. She then carries it back to the nest, lays an egg on it and seals the nest. The waps grub hatches, consumes the food provided and pupates in the cell. When the adult it chews its way out of the cell.

Mud wasps are often all black or black with orange or yellow bands or markings. They rarely sting and are not pests.