The State Government’s Improving our waterways: Victorian waterway management  strategy is now out.

The important background to this document is that Catchment Management Authorities have had staff cutbacks of around 25%, and DEPI hasn’t done much better.

The Strategy is 285 pages long, and contains lots of interesting information, with action ideas to go with it. The question is whether any of the ideas will ever be properly implemented.

The relevant ministers boast in their foreword that they’ve allocated $100 million over four years to river health. This is $25 million a year—half what the Government allocates to the Grand Prix.

The poverty of resources shows in the Strategy: it seems in many cases to have simply abandoned even the pretence that the nice ideas it fields will ever be implemented. 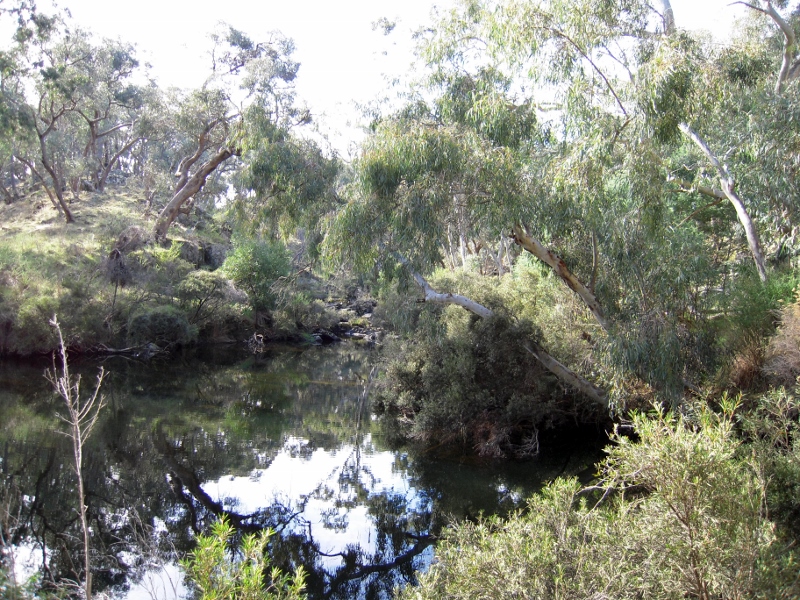 Upper Loddon: this stretch of river is one of the few healthy ones in our region: in North Central and NW Victoria less than ten per cent of streams are in ‘good or excellent condition.’ The State Government is allocating half as much money to river health as it is to the Grand Prix.

A good example is on the matter of recreational activities. When the Draft Strategy was released for consultation in 2012 FOBIF made a submission which read in part as follows:

“On page 77 Policy 7.7 reads: ‘Where recreational activities occur that may impact on water condition, the relevant waterway manager or land manager will identify and manage these risks, where possible.’

“It’s hard to believe such a gormless policy can be seriously proposed in this important document. This amounts to saying, ‘If someone is damaging our waterways, we’ll try to do something if we can. If we can’t, we’ll just identify the problem and watch it get worse.’

“We propose as a replacement: ‘Where recreational activities impact on water condition, the relevant manager will act to control, redirect or ban such activities, in consultation with recreational users and their representatives.’”

Now that the final Strategy is out we can see if our suggestion was considered. Policy 7.7 now reads:

‘Where recreational activities occur that may affect water condition, the relevant waterway manager or land manager will identify and work with recreational users to manage those risks.’

The final version at least removes the pathetic phrase ‘where possible’, but isn’t much better than the original: it has to be remembered that the objective to ‘manage the risks’ is rapidly becoming  bureaucrat speak for ‘make a show of doing something, but don’t annoy anybody.’

A good example in this document is the section on duck shooting, a practice boosted by the current government. In spite of the scandalous event in March last year when over 800 birds – including 150 rare and endangered species— were massacred illegally near Boort, there’s no provision in this document for tighter supervision of this practice.

In fact, there’s no mention of control at all, just a lot of guff about sustainable hunting, and nice things about conservation minded hunters. Readers will be interested to learn that

This is called ‘balance’.

The section on riparian grazing is similarly gormless: this practice will continue, as long as it’s good for the environment. How this will be assessed, if at all, is not clear.

And lastly: the previous government’s 2004 Our Water Our Future [a document with its own problems] mentioned that rainfall in the Murray Darling basin is expected to decline by about 5% by 2023. You’d think that would be a pretty important consideration in a book about waterways, but all we get in the current strategy is a short paragraph about ‘natural climate variability.’ Human induced change doesn’t get a mention. That would explain why there’s not much urgency in the document.