Fire operations: what we want is clarity

The planned burning season is on us. As we have regularly reported, FOBIF is not opposed to sensible, targeted fuel management. Our submission to the current Fire Operations Plan is set out below. Essentially, it asks that DEPI follow the procedures of its 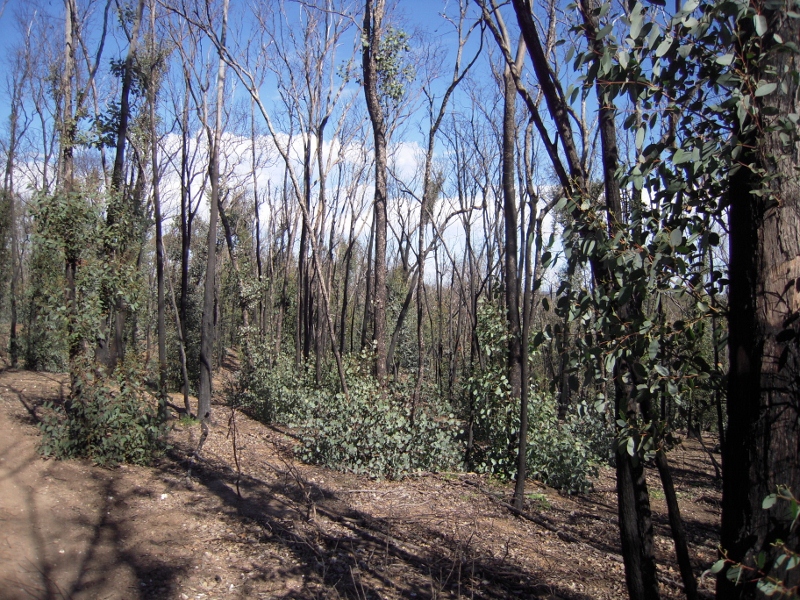 Dalton’s Track zone six months after a management burn, 2012: we do not believe that fuel reduction should mean creating a disaster zone.

own Code of Practice, that due care be taken of sensitive areas, and that clear and accountable objectives be set out for each operation:

Thank you for the opportunity to comment on the draft Plan.

Our position on this Plan is essentially the same as we presented in 2012. The following submission should be read in conjunction with the detailed comments we made then.

The 2011 burn conducted in the Muckleford forest area appeared to us quite inconsistent with the supposed aim of the exercise.

·       We would like to know how the proposed burns will ‘complement works’ in adjacent zones, and how they will ‘assist in ecological resilience and regeneration.’

The way these are presented in the document is confusing:

They are listed as

It is therefore impossible to comment on these proposals in detail.

We’d like to repeat what we said last year, however:

·       First: Mount Tarrengower should not be zoned Asset protection in its entirety. Instead, the mountain should be carefully assessed in relation to the town of Maldon, and a fuel reduction strategy based on that assessment. Repeated burning of the whole mountain under Zone 1 requirements would put at risk a significant tourist asset, not to mention ecological values.

·       Second: steps should be taken to prevent the Perkins Reef fire offering any assistance to the rampant growth of Oxalis [and other weeds] on that side of the Mountain.

·       We repeat our 2012 concern that fire be used to control flammable weeds…and that management fire not be a cause of weed spread.

Three of these proposed burns are adjacent to or close to this year’s Limestone Tk CAS 51 [Tarilta] exercise.

·       We would also like to know how DEPI will avoid a repeat of the disastrous soil loss caused by severely burning steep slopes on Tarilta last year. These burns also contain steep topography [especially Middleton Creek].

·       There are [unusually for this region] many large trees in this area. We assume these will be protected.

·       In this zone there seem to be significant endangered EVCs [alluvial terraces, creekline grassy woodland] which should be excluded from burns.

DSE’s Draft Waterway Management Strategy [2012] says that ‘Excessive runoff from recently burnt waterways can cause flooding and carry high loads of sediments and nutrients into waterways, particularly if a bushfire event is followed by heavy rains. Increased nutrients can lead to algal blooms in downstream water bodies. Sediments can reduce instream habitat….’ p 195

·       We ask for assurance that DEPI’s proposed burns will not bring about this result.

On the whole we do not object to small APZ areas strategically placed around settlements. We do not believe, however, that fuel reduction in these areas should involve the virtual obliteration of the forest, as happened in this area with the 2012 Ashby’s Tk burn.  We are slightly surprised that an unburned fire investigation plot [CAS 36] could be found in this holocaust, and would be interested in knowing what the ‘investigation’ finds.

The FOP table is hard to follow [CAS 3 has a BMZ tag, with an APZ description]

·       We believe that DEPI has a special responsibility to manage fuel in this area without destroying the Park’s many values. We have been pleased so far at the detailed interest shown in the area by managers, and hope that this can be translated into a productive outcome.

Given that the Sandon Forest almost disappeared in the 19th century, and is a remarkable survivor, we believe that careful mosaic treatment of this very large block is especially important.

·       We would like to know how this exercise will complement works in adjacent zones, and what lessons have been learned [and implemented] from previous experience in this forest [eg, at Biggles Tk]. We are also interested in how fire protection measures in this bushland are integrated with management of the adjacent private land.

·       We repeat our request of 2012 that these be treated as genuine mosaic burns with informed approach to ecological values.