FOBIF walk in the Fryers Ranges

The second last FOBIF walk for the year took place in the Fryers Ranges west of Taradale on Sunday 15 September.    A 20 minute portion of this walk was conducted as a “sound walk” during which (without speaking) we listened to the soundscape to which our own passing contributed.  People commented later that this silent walking led to a more intense visual and aural experience of the bush.  We may include a sound walk on one or more occasions next year if people are interested.

In fine and mild to warm conditions, a group of 25 to 30 set off for a 10k walk through the bush, ably led by Alex, who led us across country rather than along tracks.

Perhaps owing to the weather and the time of year, there seemed to be more bird activity than I have noted at other times in the area. Although I only recorded species while on the move, and didn’t use binoculars, I had noted the following by the walk’s end; Superb Fairy Wrens were abundant, especially near the race, where also the distinctive call of the Fan-tailed Cuckoo was heard persistently, as well as further into the walk. Others noted along the way were White-throated Treecreeper, Rufous Whistler, Grey Shrike-thrush, Black faced Cuckoo-shrike, Red Wattlebird, Common Bronzewing Pigeon, Galah, Crimson Rosella, White-winged Choughs, Grey Fantail, Yellow Robin. 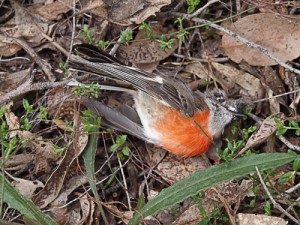 Toward the end of the walk, someone found a recently deceased body of a female Scarlet Robin (apparently undamaged)

The final FOBIF walk for the year will be in another part of the Fryers Ranges. Richard Pease will lead the walk and you can find out more about this one here. We are now planning the 2014 walks program. If you have an idea for a walk or would like to lead one we would be very interested in hearing from you.  Contact details are here.