It’s hard to put figures on the problem, but it seems that rubbish dumping on public land is increasing. The latest outrage is on the Doveton St extension in Kalimna Park, where a collection of mouldy armchairs has been deposited, in an exercise which can only be seen as thumbing the nose at Park managers. It’s clear that those who think of the bush as their private tip believe that there are so few rangers that the chances of their being caught are minimal. 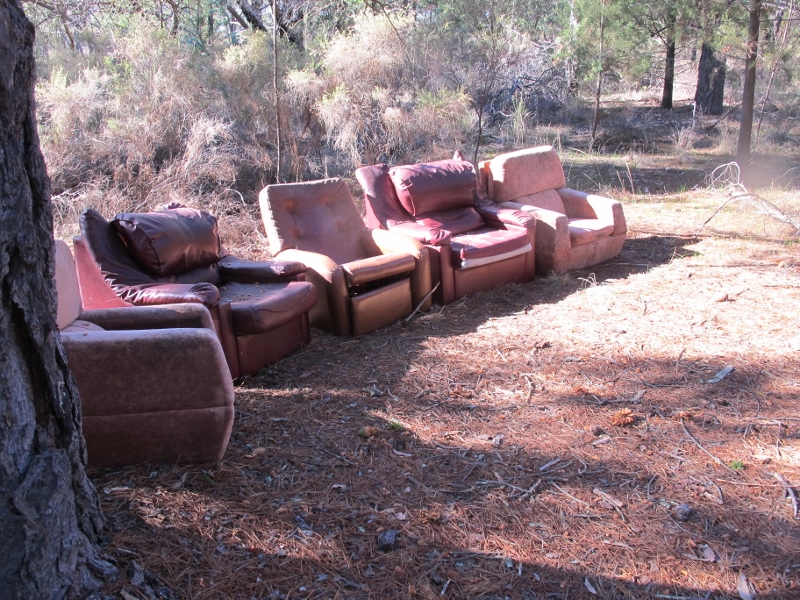 Yeah, very funny: mouldy furniture dumped a hundred metres from houses in Kalimna Park--clear evidence that dumpers have no fear of being caught. Victoria's parks make millions for the state, but ranger numbers are being cut.

Parks Victoria is in the process of cutting ten percent of its workforce. This measure is surrounded by the usual double speak that accompanies service cut backs: we are told that ‘any staff with roles in critical service delivery functions’ will be ineligible for a redundancy package. This kind of comical jargon seems to suggest that before this year, ten per cent of Parks staff were sitting around doing nothing. In fact, it tells the public that staffing in research or education will continue to be savaged, because these functions are not ‘front line’: but it’s clear that with these cuts, even ‘front line’ rangers will go.

Here are some facts about Parks:

–Victoria’s Parks make a profit for the state: as an example, the recent report on prospecting by the Victorian Environmental Assessment Council showed that, for example, the Grampians NP brought $246 million into the state in 2001-2. In that year, the Park cost $2.6 million to run. This kind of figure could be repeated for other ‘iconic’ parks like Port Campbell and Wilson’s Promontory.

—A Tourism Victoria report found in 2007 that ‘the delivery of…interpretation by Parks Victoria rangers is…critical, particularly for international visitors. There are currently limited opportunities for visitors to engage with Parks Victoria rangers.’ Attracting international visitors to our parks is one of the major aims of our tourism industry–but the government’s cut backs are removing one of the critical things which would make Parks more accessible to them.