The Victorian Environment Assessment Council has named areas in six National and State Parks where prospecting could be permitted. This is in addition to areas where this activity is already allowed—like State Forests and other tracts of public land (including Castlemaine Diggings NHP).

VEAC had no option but to recommend some extension of the areas available to prospectors [see our Post], but the impression you get from its very interesting Report is that the Council was extremely reluctant to oblige. It’s clear from the 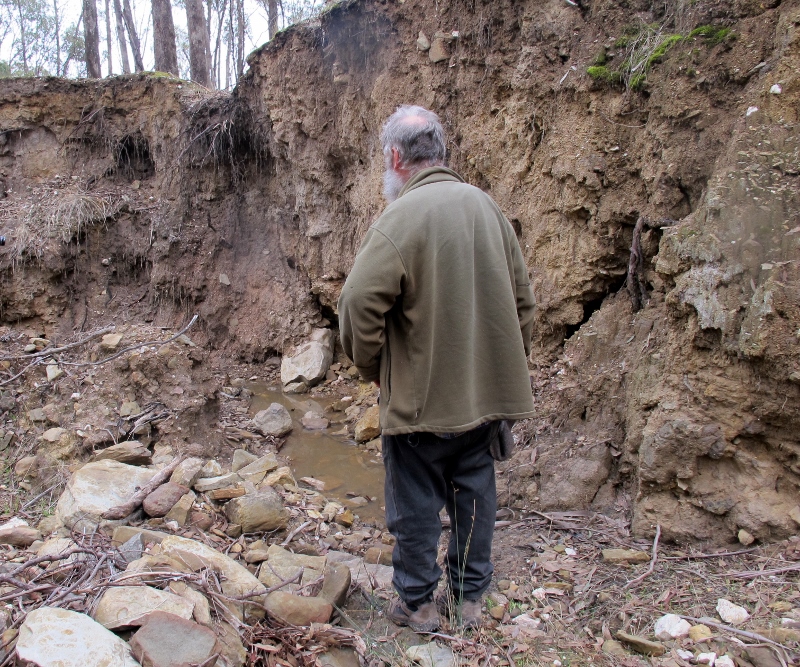 Doug Ralph surveys prospector gouging in Dirty Dick's Gully. It's clear from the VEAC report that supervision and monitoring of prospecting is inadequate or non existent.

Report that prospecting does damage the environment, and that it’s incompatible with the primary purpose of National Parks, which is nature conservation. VEAC was obviously convinced that a significant number of prospectors do not observe their code of practice, and the report contains testimony  from water and heritage bodies that the activity is a threat in both those areas. Even when it is properly done, prospecting is not exactly benign:

‘While the Council considers that prospecting can be carried out in ways that minimise impacts on the natural environment, it is aware that there are also instances of inadvertent disturbance to flora and fauna. Even when holes are immediately and carefully filled in after prospecting, the soil structure and the biota are disturbed in the immediate area.’

Our photos below are an illustration of this fact. 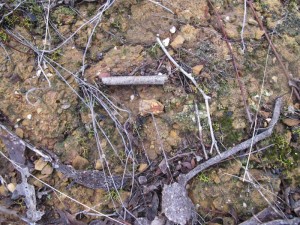 The top picture at left shows bare soil colonised by soil crust lichens and mosses. These are the first stages in recovery of degraded ground, and provide the possibility of other plants continuing the recovery. Digging destroys the crust, and the process has to start again. Even if the prospector fills in the hole [as the bottom photo shows], the damage is done. 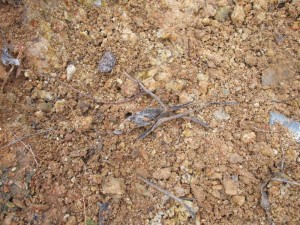 The argument of the prospectors’ representatives is that the damage is minor, and is outweighed by the social benefits of this recreation. This argument deserves respect, but only in areas–like State Forests–whose primary purpose is not conservation.

The VEAC Report lamented the lack of hard data on this activity, in spite of government undertakings to supervise and monitor it. One of its recommendations may be seen as an implicit criticism of both Labor and Liberal governments: ‘This activity should not be introduced in additional parks if sufficient resources are not available for management.’ The Report implied that the cost of this management might well outweigh any economic benefits prospecting might bring to the State.

The Report noted the argument of the Prospectors and Miners Association of Victoria [PMAV] that  prospecting does ‘not damage the environment, particularly when compared to the impact of pest plants and animals on public land.’  The PMAV ‘cited a lack of evidence to support the suggestion that there were impacts. Rather, the PMAV maintained that most prospectors follow sound environmental practice under a code of conduct, and informally assist with environmental management activities on public land, for example, through weed and rubbish removal.’ We found this last claim curious.

The fact that the PMAV can cite ‘lack of evidence’ is a damning comment on the failure of Parks Victoria to fulfil the monitoring requirement in the management plan of the Castlemaine Diggings NHP. There is plenty of evidence for ‘impacts’. FOBIF and other environmental groups supplied some to VEAC, and the Council accepted this evidence as serious: but there is a real need for systematic research on the subject, and this is one of the recommendations in VEAC’s report.

Like a lot of things to do with land management, much of this discussion comes down to resourcing. Among other things, the report reveals that in 2001-2 the Grampians National Park brought $246 million into the Victorian Economy. In that year, $2.6 million was spent on managing that Park. Public land is managed on the cheap, and damage concealed by denial or empty promises. We’ll watch with interest to see if VEAC’s Recommendations R3, R4 and R5, to do with research and resources, are accepted by the Government. It will be even more interesting to see whether they’ll actually be implemented.