Gill is referring to the Selwyn map, produced in 1852 and showing the area between the Campaspe and Loddon Rivers, with Mount Alexander at its centre.

You can have a look at the map via our 2011 Post. It is in fact very beautiful, but Gill’s point is that it is a document which essentially records the state of the environment as it was under Aboriginal management. By showing numerous squatting stations on the best land, it is also a record of dispossession. 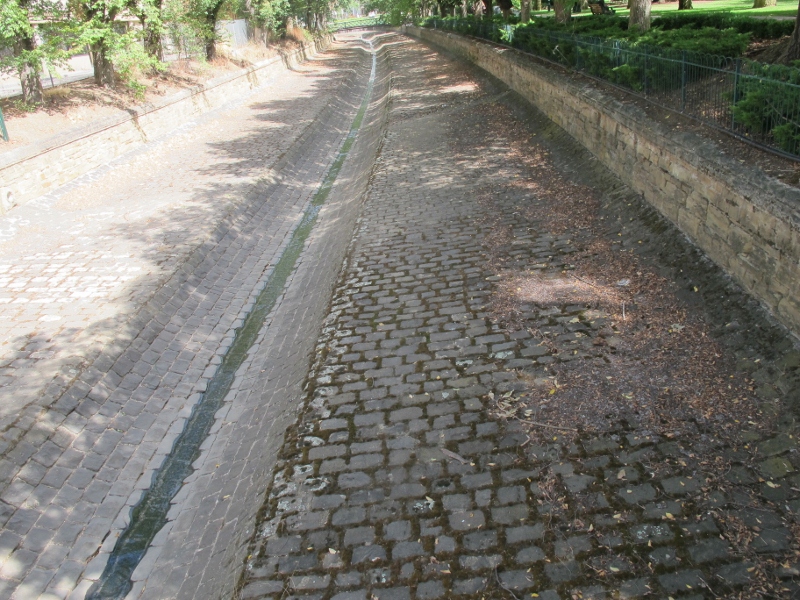 Bendigo Creek. Early observers watched kingfishers and platypus in the creek. A Royal Commission recommended the engineered gutter solution to the destruction wrought by gold seekers.

The map is on display at the Bendigo Post Office Gallery. It’s part of an exhibition which also includes two short films made by Gill, one on the map itself, and the other on the history of the Bendigo Creek. Gill quotes an early observer of this creek, entranced by the sight of kingfishers and platypus. Within a short time the creek had been reduced to a channel for noxious sludge pushed 160 kilometres north of Bendigo and covering 700 square kilometres of productive land with hardened clay. The creek, says Gill, struggled to survive against early gold seekers, but was finally finished off by the puddling machine [see our post on this ingenious device]. After Royal Commission enquiry into its dreadful state, it was engineered into the gutter we know today.

The exhibition runs till June 16. Don’t miss it: and there are numerous associated talks and events.