Ever wonder where the soil went?

The photo below could be duplicated hundreds of times through our region: a tree sitting on a ‘pedestal’on the edge of a deeply eroded gully. When that tree was young, it was at ground level. So, where has all the soil gone? 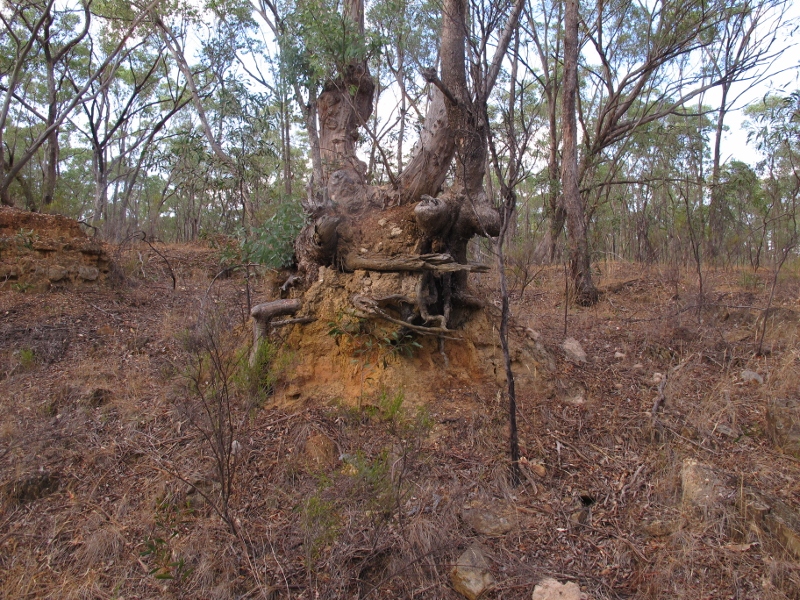 Tree 'pedestal', German Gully: once this tree stood at ground level. Annual soil loss in most of Australia is estimated at one tonne per hectare, twice the rate at which it can be replaced by organic decomposition.

The obvious answer is, it’s been washed away downstream, eventually ending up in the Loddon, as a result first of nineteenth century mining works, and afterwards of a long process of erosion.  Here’s a report from the Mount Alexander Mail, August 27 1854:

‘The water in the Loddon was higher last week than it has been all the season. The puddling and sluicing on the banks of the stream have converted its once clear current into as muddy a state as many of its tributaries. It is said that the fish that were occasionally washed down Fryers Creek sunk to the bottom, as though suddenly deprived of motion, on reaching the earth-laden waters of the Loddon. Just now it is questionable whether any of the finny tribe can be found near the Junction.’

Almost all of our eroded gullies show a dual process: relentless erosion, and painfully slow build up of vegetation cover counteracting that erosion. In theory, land management policy encourages the second process to stop the first.

Soil loss is a continuing problem in Australia. According to the Federal Environment Department, ‘annual soil loss is commonly greater than one tonne per hectare across most of Australia. This is approximately twice the rate that Loughran, et al. (2004) cite as the agreed rate (adjusted for location and seasonality) at which soil is replaced by organic decomposition.’ That’s one reason why FOBIF believes that any extension of activities like prospecting should be resisted until we can be confident about their effects [see our submission ]