Marjorie Theobald has sent us this interesting account of the condition of native vegetation in the Forest Creek area in 1852. It’s by botanist Daniel Bunce, who was a reporter for the Argus. He later became the founder of the Geelong Botanical Gardens:

‘It is surprising to see how a desire to amass ‘filthy lucre’ has superseded every other feeling for what is rational and interesting. On most of the hills, where elevation has rendered them useless for the purposes of digging, may be see a large number of very beautiful and interesting species of plants in full blossom. Among them several species of acacia or wattle, two or three species of eriostemon, and its closely allied family boronia; two of the pretty coral-like blossoming grevillea; two leucopogon, and several other of the natural family epacridaceous, plants of which the genera epacres forms the type, and one of which, the foveolata alba, is now in blossom. The disandria foliata, the scent of the blossoms of which proved so offensive to the olfactories of the ‘itinerant’ correspond of the Geelong Advertiser a few months back, all these plants, with many others, may be enumerated, but they are passed by the digging population without  the slightest regard being paid to their beauty or odour. A further description here would be considered superfluous and unnecessary.’ [Argus, 8 October 1852]

Bunce’s perspective is an unusual one. For a contrasting outlook, check the current edition of the Chewton Chat , which carries an interesting article titled ‘A sketch of Forest Creek in 1853’ Also have a look at the photo below which was taken by Richard Daintree between 1859 and 1863. The image is from the National Library of  Victoria collection. It was reprinted in the Forest Creek Action Plan (Connecting Country, 2012). 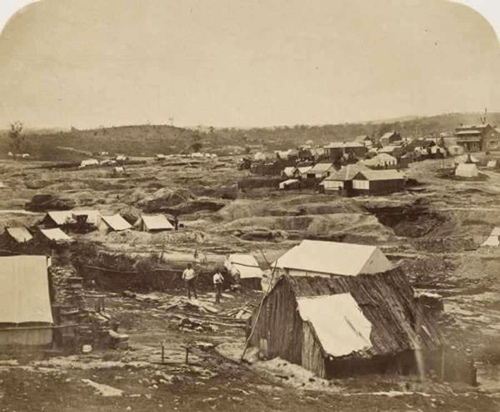