‘The only effective way of measuring change’

The August meeting of the Castlemaine Field Naturalists Club featured a talk by Ern Perkins on systematic environmental monitoring over time: ‘the only effective way of measuring change.’ The following report is based on a more detailed account in the CFNC newsletter, Castlemaine Naturalist.

CFNC have been doing systematic monitoring of birds and vegetation for many years using photo points, GPS locations and counts. For birds, they have been following the method proposed by the Australia Bird Atlas: using a fixed area of 2 ha, and recording a session for 20 minutes per month. Ern and Lesley Perkins have established 14 locations and over the years have totted up 1285 visits. In that time, some bird populations have stayed fairly constant [Magpies, Little Ravens Galahs, Cockatoos, Red Wattlebirds and Crimson Rosellas]. For others there is a persistent downward trend, both in species and in numbers: for example, the Southern Whiteface was common at the start of the process, and is now very rare. Decline of bushy understorey is a key in this decline, and the long drought is obviously part of the explanation for this. The decline in numbers is not so evident in urban areas, where trees may be in better condition, though the prevalence of cats makes this a high risk area. 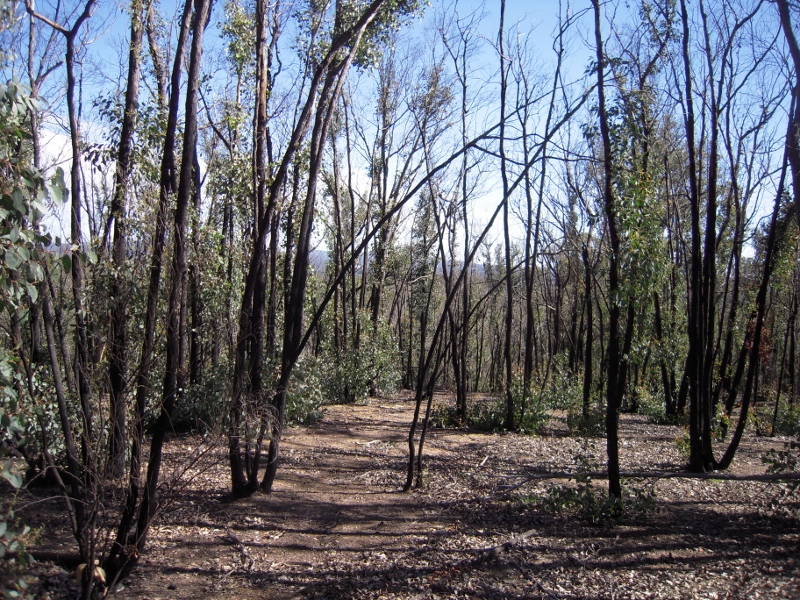 Daltons Track burn zone, September 2012, after a DSE burn in 2011: 'Asset Protection' zones like this one will not get enough time to recover from frequent severe burns.

On vegetation, Ern and Lesley and other CFNC members regularly survey 115 quadrats. A number of these were set up in and outside DSE control burn areas for comparison over time. Although caution is necessary in interpreting the results, Ern was categoric that successful post fire regeneration in a drought year is close to zero. Further, there is evidence of considerable increase in weeds after burns. Sometimes burns are followed by apparently flourishing regrowth  which quickly dies off. Further long term research is necessary to establish more reliable data. In particular, Ern pointed out that the effect of repeated fire on invertebrates, the basis of the food chain, is a complete unknown.

The Castlemaine Naturalist can be got by contacting CFNC at Box 324 or through the club website. At the next CFNC meeting Cassia Read will talk on biological soil crusts: ‘miniature wonderlands of the dry country: what you miss when you don’t walk on your knees.’ [Friday September 14 at 7.30, Uniting Church Hall, Lyttleton St].