DSE fire management officer Simon Brown outlined the process by which the FOP is developed, and he and other DSE officials fielded questions from the community members, who came from an area encompassing Echuca, Graytown, Taradale, Castlemaine, Muckleford and Bendigo.

All discussion was limited by the acknowledgement that the policy of burning five per cent of public bushland every year is non-negotiable at this level: the policy is determined not by DSE but by the State Government, and appears to have wide public support. Any changes in that policy will have to come via community debate and subsequent political change. [It’s hard if not impossible, however, to find anyone directly involved with the policy who likes it or feels that it’s doing any good in this region]. Discussions therefore concentrated on how the policy can be implemented with minimum environmental and economic damage while achieving public safety objectives. 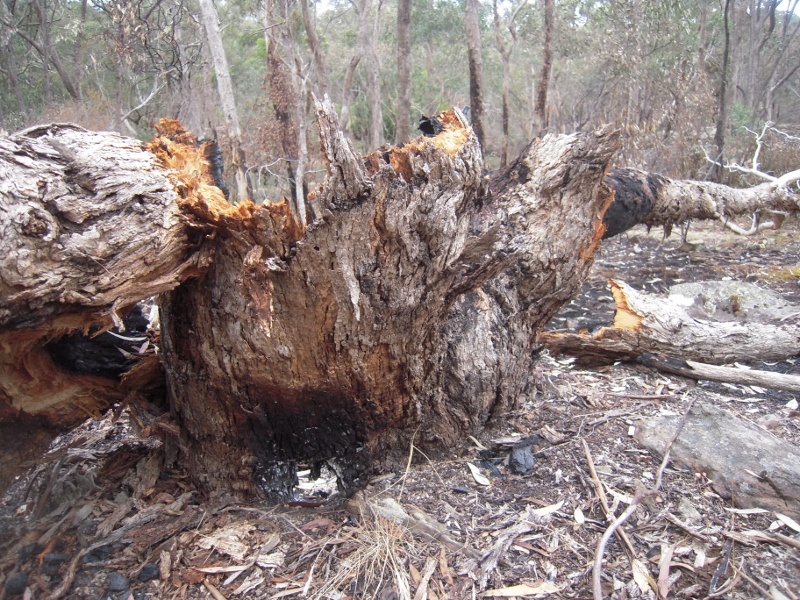 Sailors Gully, in the Quartz Hill burn, 2011: destruction of large trees under the present system seems inevitable, although all agree that it amounts to serious environmental and economic damage.

Here are some of the points which emerged from the four hour session:

In spite of a few outbreaks of dispute, participants in the meeting were concerned mainly to improve their knowledge of the management system, and contribute to an improvement in the way it works. The next such meeting will be held later in the year.