Trying for cooperation on fire

Members of FOBIF and the North Central Victorian Combined Environment Groups met with DSE officials in Bendigo on Wednesday May 9 to discuss how we might have some more positive influence on the upcoming Fire Operations Plans. It’s fair to say that discussions were positive. The environment groups were concerned principally with implementation of fire plans: that is, it was understood that Government policy was not in question, and that what we were all concerned with was how practice might be improved.

Although FOBIF believes that the five per cent burning target supported by both major political parties is harmful and does little or nothing to improve public safety, our immediate concern is that in implementing this policy DSE is not observing its own code of practice.

Two examples [of many] in recent times are an asset protection burn on Mount Alexander which was allowed through lack of supervision to destroy ten times the target area; and the Tarilta burn which was theoretically intended to achieve ecological outcomes, but was in fact a mindless holocaust. 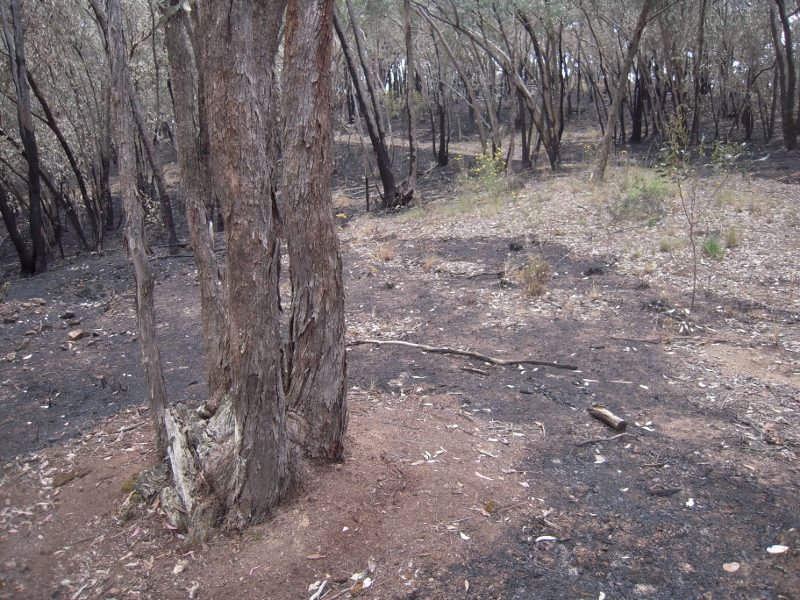 Raked earth around a tree in DSE burn zone, Muckleford forest: this practice is essential to protect older trees, but seems to be done erratically, and there is suspicion that it is done mainly closer to tracks, where damage will be more obvious. Environment groups have asked DSE for maps and documents which would show transparently the detailed planning which is supposed to go into every operation.

Environment groups at the Bendigo meeting tabled a list of documents they would like to see before the next Fire Operations Plans are finalised. The intention of the list is to get some kind of transparency into DSE’s fire practices. We would like to know what the reasoning is behind each burn, and what measures will be taken to ensure that the stated objectives are achieved. We were not promised anything, but were assured that efforts would be made to produce what documents were possible.

DSE staffing around the state, including Bendigo, is understood to have been cut by about 30%. The State Government as given assurances that none of the cut positions is ‘front line’, but this is a shady justification, suggesting that if you’re not ‘front line’, you’re not really needed. The documents listed below are produced by people who are essential to the proper conduct of ‘front line’ operations.

– Map (at least 1:100,000 scale) of whole region showing all proposed burns AND all past planned burns, stratified by season and burn cover.

– Map (at least 1:100,000 scale) of whole region showing all completed monitoring points (stratified by monitoring type), undelayed by all past planned burns.

– Map (at least 1:100,000 scale) of whole region showing all Historical Wildfires, including all fire less than 5 ha shown as a point feature.

– Map of whole region showing the fire risk model which has been applied identifying each component and how it is calculated.

– Computer and projector with high resolution DSE Aerial photography (displayed in a GIS, not online) covering all burn parcels.

– For each proposed burn provide a detailed Adaptive Management Framework which is being applied stating how it will improve ecological management outcomes, how it will be monitored, how change will be detected, and how it will be reported.

– DSE to provide a list and explanation of all operational actions that can be used to prevent negative ecological effects.

– DSE to provide a list and explanation of the recognised ecological effects resulting from past planned burning in the Goldfields Region.

– DSE to provide a detailed model of age class distributions that it aims to achieve for the region through the planned burning program, explaining how this will enhance specific biodiversity values.

1 Response to Trying for cooperation on fire