‘So what if Newstead is flooded?’

A fascinating collection of old photos of our waterways collected by the Catchment Management Authority gives a bit of a sense of how far things have changed in the last sixty odd years. The picture below of the Loddon river bank upstream of Newstead, for example, shows a bank seriously prone to erosion, with erosion producing activity continuing.

1946 was the year work started on the building on Cairn Curran, in the romantic age of dam building. The project was not without its detractors, however: Newstead councillors expressed the fear that banked up water would flood the town, for example. For their pains they were the object of a tremendous blast in the Castlemaine Mail in March that year from one John Somer: ‘feebleness of brainpower’ was their problem, according to Mr Somer. Newstead was built in the wrong place, he said, seeming to look forward with some enthusiasm to the prospect of the town being flooded. 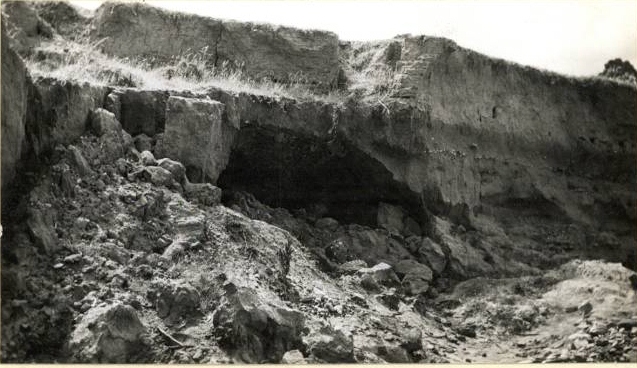 Loddon River bank near Newstead, c 1946: The top four feet, above the dark line, is 'muck, slum and sand' washed down from past dredging operations upstream. The tunneling is prospectors' work.

‘What if it is?’ he asked, before suggesting that everyone would be better off if Newstead was wiped off the map, so that a new, better town could be built on a more sensible site: ‘A new Newstead will arise in all its glory with properly designed alignments and something considerably more elegant in architecture than the higly pigly hotch potch of habitations that now exist.’

Mr Somers’ complacent contemplation of the drowning of Newstead was probably helped by the fact that he lived in Maldon. It’s also a bit hard to understand his negative portrait of a town most people [well, pretty well all people, actually] find very attractive. He did make some interesting points in his letter, however: he suggested that Aborigines, who knew the ‘vagaries of the Loddon’, made their settlements out of reach of floods, and were much more sensible than early white settlers who repeatedly went back to their houses after floods, only to be flooded again a few years later; and his description of the Loddon river flats as being covered with mining debris of ‘muck, slum and sand’ isn’t a bad description of what you can see in the photo above.