A lot of fires are being lit, but what’s being achieved–and how would we know?

The meeting did not discuss State Government fire policy. It was solely concerned with the implementation of this policy, in the light of conservationists’ dissatisfaction with the way burns are being conducted.

The objectives listed below were put to DSE officers at the meeting. They would require managers to be very precise in their burn plans about how they will manage key risks and how they will take into account community submissions. They would also require the publication of clear assessments of each burn in the light of the plans:

Objective 1 – DSE to provide detailed mapping of each burn parcel, as listed in Appendix B of the Code of Practice, to identify a broad range of regionally specific ecological values. 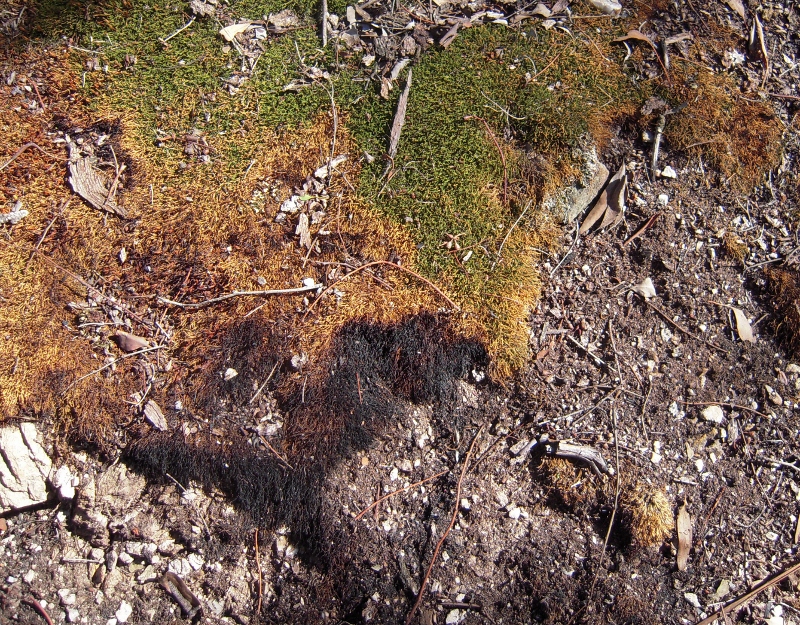 Burned moss patch, Muckleford State Forest, March 2012. Moss is not flammable, and is sensitive to fire. It performs a valuable role in forming crusts which protect land from erosion and soil loss. Prescribed burns which destroy such patches do not reduce fuel, but they do damage the bush. Conservation groups in Bendigo want DSE to specify what its objectives are in burns--and to be open about what they really achieve.

Objective 2 – DSE to provide detailed fuel load mapping for each burn parcel and across each Fire Management Zone.

Objective 3 – To ensure the expectation for adaptive management in the Code of Practice is met, DSE to provide detailed responses to community Fire Operations Plan input, accurately describing how this has been incorporated within the approved burn plan.

Objective 4 – DSE to prepare a fire ecology strategy before commencing further burning in the Goldfields Bioregion to ensure the expectation for adaptive ecological management in the Code of Practice is met.

Objective 5 – DSE to visit sites with community stakeholders and physically identify values visibly in the field prior to burning operations occurring, and in addition recoding the information in a spatially explicit manner to be provided in the effective Burn Plan.

Objective 6 – DSE to accurately specify the prescriptions for each burn, describing how these reflect the environmental sensitivity of regional ecosystems, and specific values within each parcel.

The meeting was run by a mediator, and was conducted in a good spirit. However, DSE was unable to commit to any of the objectives put before them, although these objectives are consistent with the Department’s own Code of Practice. They are also in line with recommendation 57 of the Royal Commission:

RECOMMENDATION 57 – The Department of Sustainability and Environment report annually on prescribed burning outcomes in a manner that meets public accountability objectives, including publishing details of targets, area burnt, funds expended on the program, and impacts on biodiversity.

We suspect that there would be a resourcing problem in fulfilling them.

The aim of the objectives is to introduce some clarity into the prescribed burning regime: we know a lot of fires have been lit, but what exactly has been achieved by it? Has community safety really been increased? What have been the ecological outcomes? In theory, DSE should be able to supply some answers to these questions. We haven’t been able to access these answers.

There will be follow up meetings to discuss the annual Fire Operations Plan [FOP] in:

July – preview of the draft FOP, to address ecological concerns before release of the draft in August, and to review outcomes from previous burning activities,

September – detailed feedback about FOP input on specific ecological values and measures to protect these.