Looking at the fire record

A solid crowd of about 80 rocked up to the second talk in the Connecting Country 2011 education program at Campbell’s Creek on August 25.

Dr Arn Tolsma gave a deeply engaging account of fire history in Australia, and in particular the South Eastern corner of the country.

He showed evidence from analysis of peat cores that over thousands of years until about 1800 the incidence of fire has varied according to climate, not from human action. Incidence of fire increased dramatically in the 19th century.

In particular there is little evidence of widespread Aboriginal burning. Early settler witnesses of Aboriginal fires are extremely vague, and suggest that it was limited in extent, and largely confined to grassland and grassy woodland. 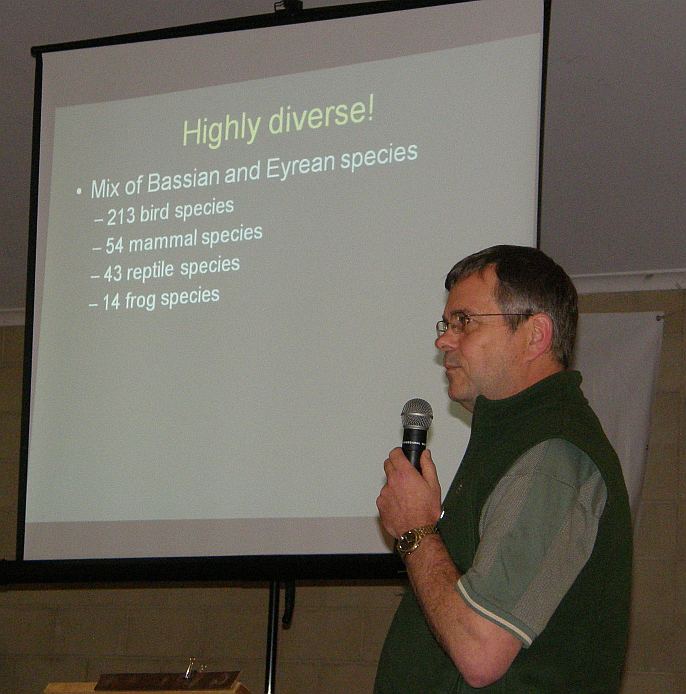 Arn Tolsma at Campbell's Creek: intervals between fires should be between 20 and 100 years, if ecological health is the prime consideration

On the subject of our region, he referred to the 1853 Selwyn map, which showed that river and creek lines were open and grassy, but ridge country wooded with scrubby box and stringybark: in other words, the idea that the forest was open country before settlement is false.

He showed that there is no strong evidence that Box Ironbark environments must have fire to regenerate. Using the concept of ‘tolerable fire intervals’ he argued that fires at intervals of a minimum of 20 and a maximum of 50-100 years might be beneficial for these environments. Any use of fire should be carefully planned with very clear objectives established after site, vegetation and fire history analysis.

Dr Tolsma emphasised that he was speaking of fire as a management tool for the environment, a separate issue from the use of fire as a fuel reduction method. It is clear from his talk, however, that fuel reduction zones burned, say, every five years, will  suffer ecological damage. This is consistent with the position of DSE fire managers, who frankly admit that ‘asset protection zones’ are ‘sacrificial zones’, ecologically  speaking.

Dr Tolsma is co author of the DSE/CMA publication Ecological burning in box ironbark forests [2007]. The two volumes can be found online here and here