What’s happening up at Morgan’s Track?

The rather sad sign below is a marker on Morgan’s Track Chewton of the Ecological Thinnings Trial conducted by Parks Victoria beginning in 2003. 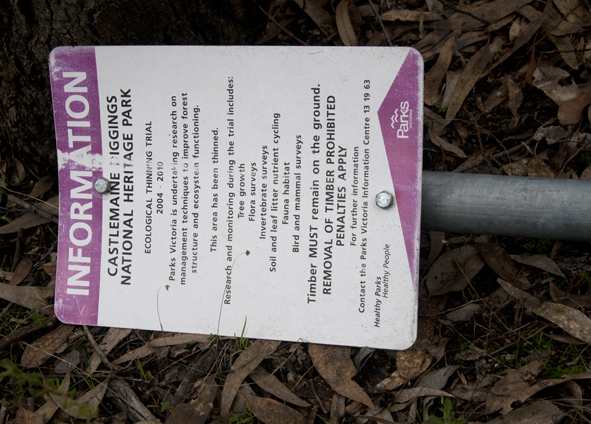 Despondent sign at Morgan's Track, July 2011: we hope that ongoing research on this trial will prove valuable. We have been assured that the research continues. Photo by Bronwyn Silver

The trial was proposed by the Environment Conservation Council when it recommended the establishment of new Box Ironbark reserves in 2001. The intention is to experimentally aim at the restoration of a pre white settlement forest structure by strategically thinning selected plots in the aim of getting a woodland of more widely spaced, larger trees, and a healthier, more diverse understory. In fact, our woodlands are on the whole gradually thinning themselves as weaker trees die: so the trial is an effort to speed up the work of Nature.

FOBIF did not oppose the trials, even though we thought that in our region they were misconceived, and the money and resources could have been better spent elsewhere—on weed control, for example. We did concede, however, that the accompanying monitoring and research could prove very valuable for our understanding of these ecosystems. For a more detailed account of our views, you can read an item from our 2008 newsletter here.

FOBIF members did a prowl around the Morgan’s site on July 8. This area has always been rich in wildflowers, and it looks like the coming spring will not disappoint. Even in the dead of winter there’s plenty to see, as the pictures show. 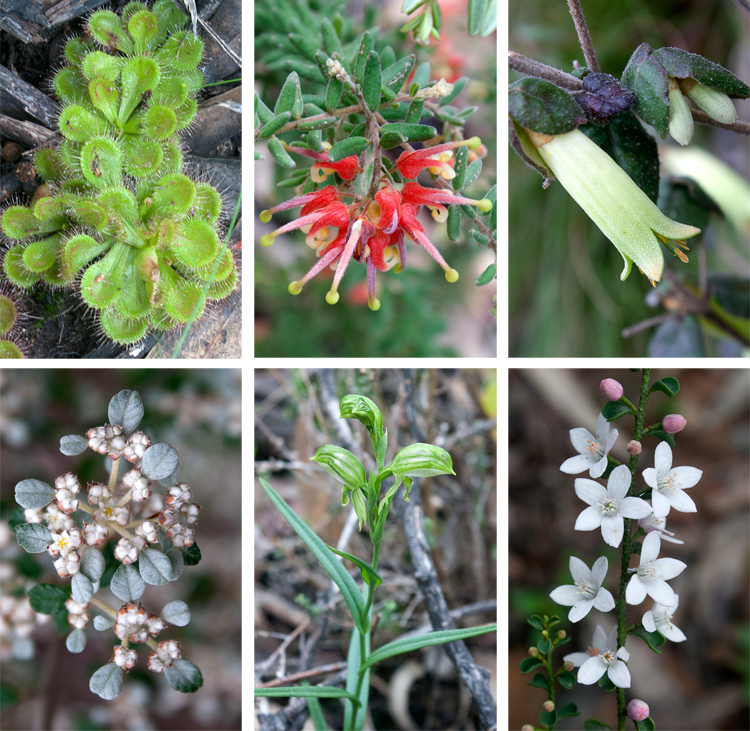 Even in the dead of winter, there's plenty to see at Morgan's Track. Photos by Bronwyn Silver, July 2011

And the effect of the trial? Monitoring up to 2008 cautiously suggested that the thinning had up to that point been positive in encouraging understorey diversity.

In fact, however, monitoring is mainly important in establishing a benchmark with which to measure future changes: ‘Data collected during 2003-2008 is being analysed to develop future monitoring programs. As determining the effects of thinning on Box-Ironbark forests will require an ongoing commitment to monitoring and evaluation, it is acknowledged that responses for some indicator groups to thinning in Box-Ironbark forests will take some time to detect. More specifically, tree growth and hollow development could take decades, while some elements such as invertebrates, floristic structure and ground litter are likely to show some short-term responses.’  In other words, it will be a long time before we can see the results.

We are a little concerned that the cited ‘future monitoring programs’ may not eventuate. And we hope that the fallen sign is not an indicator that the program has been moved down the priority list. We are assured by Ranger in Charge David Major, however, that ‘There has been extensive monitoring carried out since the cutting was finished, and that info is being assembled into a report that will be made public when complete.’

In the mean time, a visit to Morgan’s Track is strongly recommended—especially in the coming Spring. 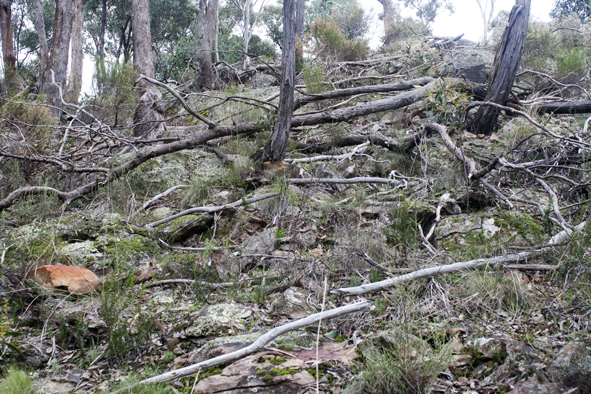 Thinned trees at Morgan's track: the logic is that a more balanced ecosystem will result. Only time will tell. Photo by Bronwyn Silver