Floods: keeping ‘out of harm’s way’

These figures formed the background to the talk given by Damian Wells, the CEO of the Catchment Management Authority to the FOBIF AGM on Monday night.

Flood damage was the theme of the talk, and there were two recurring issues:

The first was: it’s better to have assets ‘out of harm’s way’ than to have them in flood plains where they have to be protected.

The second was the flack copped by the CMA over its alleged neglect of waterways ‘causing’ the floods. Members will remember that this note was struck in Castlemaine, when it was claimed in the local press in January that plantings along creeks, or failure to clear creeks of vegetation, had raised flood levels in the town. [See our post of May 13] 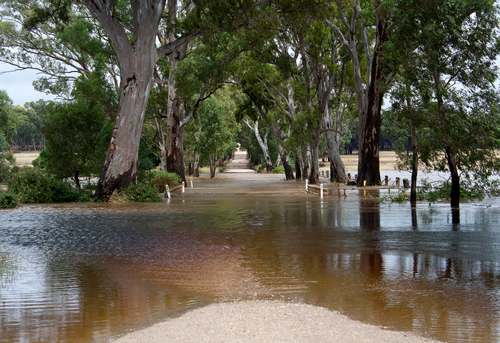 Muckleford Creek over Lewis Rd, September 2010. The floods have been a boon ecologically, but although Victoria had eight major floods last century, Councils do not have adequate maps of flood levels. So building continues on flood plains. Photo: Bronwyn Silver

On the first issue, Damian noted that town levies are the responsibility of councils, but that rural levies protecting property are a long standing maintenance problem and the source of continual disputes as to who is responsible for them. The lower Loddon has 200 kilometres of levies, and these failed in 117 places in January. It has been estimated that restoration of levies could cost $650 million. He praised the government’s offer to buy out farmers in vulnerable areas, as a more practical long term solution to inevitable floods than prohibitively expensive protection measures.

On the second theme, Damian noted that the CMA had been ‘howled down’ in Creswick for its supposed responsibility for floods there, but subsequent investigations had completely vindicated its position. Bridges and road culverts are major causes of water blockages and subsequent level rises, but the major problem is building on flood plains. The CMA is continually challenged by developers in VCAT when it opposes building in such areas.

He agreed that peak flood level models should be incorporated into planning schemes on a state wide basis, to avoid the situation of people building on flood prone land. Incredibly, he noted that current modelling of flood risk zones is inadequate. [In spite of the fact that Victoria had serious floods every 10-20 years in the last century— in 1909,1916,1917 1974 1956 1974, 1990, and 1993— it seems we still don’t have good maps telling us where not to build!]

Problems arise when flood prone land is zoned Residential 1. In Creswick a block of land was flooded in September 2010, but was subsequently built on, and the new house was duly flooded in January 2011. If such land is already zoned Residential 1, the CMA is powerless to oppose building, although it is almost certain that damage will happen.

Questions from the audience called for the CMA to publicly defend Landcare groups made the object of charges that their plantings had somehow worsened the floods. It seemed to many in the audience that agencies had been strangely unwilling to energetically rebut some of the more bizarre theories about flood levels.

Finally, Damian acknowledged that after years of drought the floods had been a ‘massive boon’, biologically, although ‘talk of ecological benefits can sometimes be hazardous to my health.’

As a post script: FOBIF has written to the Catchment Management Authority asking what brief was given to workers clearing debris from Campbell’s Creek. On first sight, the clearing works there look to be both excessive [removal of healthy native trees] and inadequate [cutting of willows which are already resprouting]. We will print the CMA’s reply when we get it.