Quartz Hill is the site of some of the earliest reef mining in the Castlemaine area. Just
2km north of Chewton, it was one of a handful of huge quartz outcrops that demanded miners’ attention. The problem is not all quartz contains gold.

A few canny miners soon realised that of the three main types of quartz, only one was reliably rich in gold. The big outcrops of ‘massive’ or ‘buck’ quartz (photo 1) are almost completely barren and the narrow ‘spur’ veins that criss-cross the adjacent sandstone and shale are not much better (photo 2). 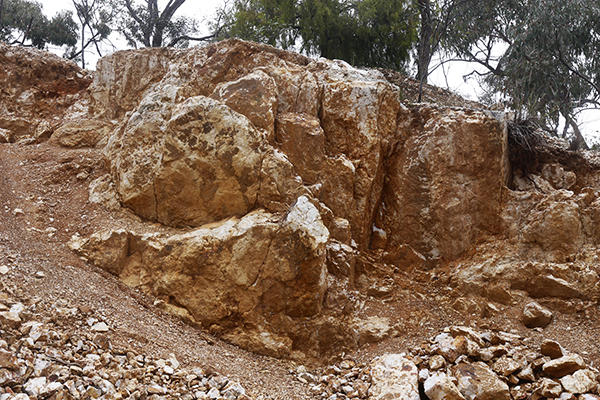 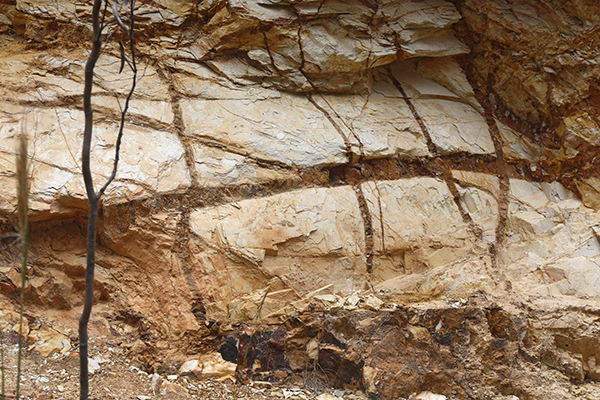 The miners left those behind for us to see but completely removed the best quartz – this had formed along a narrow fault than runs north-south along the east wall of the open cut. They worked a distinctive gold-rich laminated quartz, sometimes with thin sheets of pure gold. It had formed millions of years ago when a fluid, carrying dissolved quartz and gold, repeatedly seeped along the fault during dozens of separate earthquakes.

Amazingly, remnants of the ancient fluid are wonderfully preserved in tiny microfractures called ‘fluid inclusions’. The fluid can be probed, analysed and categorised by geochemists who find it consists mainly of water with a little CO2 and CH4  (methane) and often a tiny vapour bubble. Clever laboratory manipulations estimate the temperature and depth of the fluid at the time of deposition. So, 440 million years ago this hot watery fluid deposited its precious cargo at a depth of 10–15 km at a temperature of 300°C.

This is the third post in our geology series written by Clive Willman.