It was super but not pink 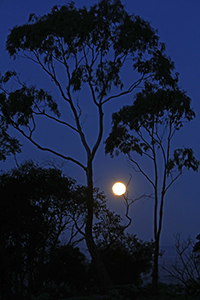 Supermoon yet to reach its full size near the summit of Mount Alexander. 6pm, 27 April.

A ‘pink’ supermoon lit up the sky above Australia last Tuesday night. The moon, which began rising around 5:30 pm, appeared 17 per cent bigger and 30 per cent brighter than usual. Several small groups gathered at different vantage points on Mount Alexander to watch it rise.

Although stunning, this supermoon is not actually pink. The description comes from American folklore where it’s named after the first pink flower of the season which is when a supermoon normally appears.

The phenomenon is caused when a full moon occurs while it is on its closest approach to earth. The next supermoon will be visible on May 25.

Another small supermoon image when it is about to set at Cairn Curran. 7.30 am, 28 April. Photos Bronwyn Silver

Spectacular supermoon photos from around the world can be found at this Guardian site.