In a different light … an exhibition by David Oldfield 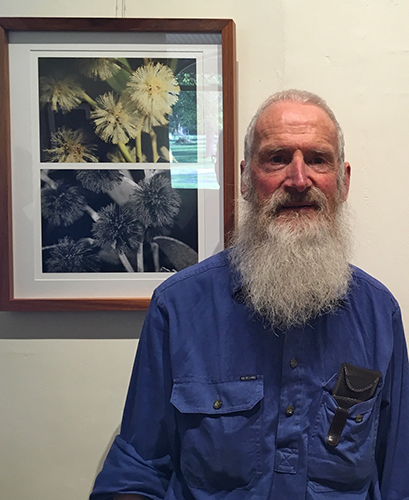 David next of one of his photo exhibits showing Acacia melanoxylon in visible light and the same image in UV light.

David points out in an introductory pamphlet that camera manufacturers go to great lengths to make sure that digital sensors in their cameras will never see Ultraviolet (UV) light as it messes with the colours. However images taken under UV light can reveal how insects see flowers:

It has been known for many years, since the days of black and white film in fact, that many flowers have dark patterns visible under UV light but not visible to the naked eye. On the basis of much scientific work on honey bee vision, the eyes of pollinating insects are known to be sensitive to UV, blue and green light, and it is widely believed that such UV patterns, known as ‘nectar guides’, assist pollinating insects to find the nectar or pollen on the flower.

With a history of photography going back to childhood, David started to take UV flower photographs in 2013. He soon realised that nobody was taking such photos of Australian native flowers and thus began his groundbreaking work in this area.

You can see David’s beautifully presented photos at the Newstead Arts Hub until 23rd June, open every Saturday and Sunday 10 am to 4 pm. The Hub will also be open on Queens Birthday Monday 11th June.

If you would like to find out how to take UV flower photographs and see more of David’s work, have a look at www.ultravioletphotography.com

This entry was posted in News, Photo Exhibitions. Bookmark the permalink.